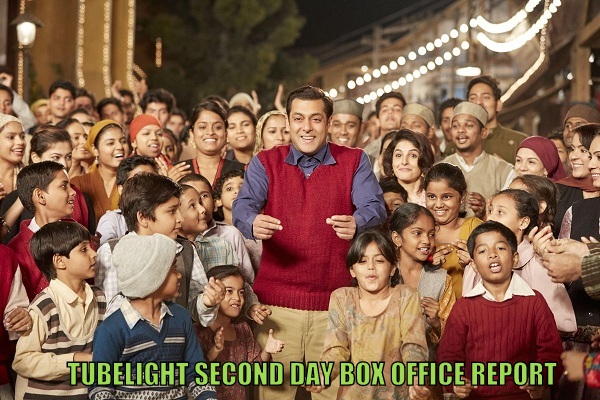 The movie had a similar start as yesterday. In fact, some centres witnessed significant drop compared to the opening day. The overall occupancy in the morning shows was around 30% which is less than the opening day. The movie witnessed some growth in the noon shows but once again the overall occupancy was less than the first day. The movie picked up in the evening shows but the growth is not significant to put up big numbers.

The real problem with Tubelight is the rejection in mass centres. Salman Khan films have a huge market in small and mass centres. Due to its multiplex theme, the movie has been completely rejected by masses.

Delhi, Gurgaon and other major North circuits were the best performing centres. own South, the movie has been severely affected by Allu Arjun’s film DJ which earned 23 crores on the first day. In Mumbai and Gujarat belt, the response is just above average.
Overall, the second day occupancy of the movie will be around 45%. Ideally, the movie should have shown a growth of at least 20% but that didn’t happen.

As per official numbers shared by Taran Adarsh, Tubelight 2nd day collection is 21.17 crores. The total collection of the movie after two days will be around 42.32 crores.

The advance booking reports for Sunday is better than Friday and Saturday. Sunday can be the highest earning day for Tubelight. The box office fate of the movie now depends on how it performs on Monday and Tuesday. The trend on Saturday clearly indicates that Tubelight will struggle to even cross 200 crores at the domestic box office.

What happened on the first day

On its first day, Tubelight earned 21.15 crores to register the second highest opening of 2017 after Bahubali 2 (41 crores). It managed to beat the opening day numbers of Shah Rukh Khan’s Raees (20.42 crores).

For Salman, Tubelight is the 7th highest opener of all time as the opening less than Prem Ratan Dhan Payo, Sultan, Bajrangi Bhaijaan, Kick and even Bodyguard which was released in 2011. (Read: Salman Khan’s top opening day grossers) Overall, things are not looking good for Tubelight and it needs a phenomenal turnaround to get back things on track. Remember, NH Studioz has brought the domestic rights for 132 crores. It means the movie needs to earn at least 260 crores to be a profitable venture for distributors. (Read: Tubelight budget and screen count)