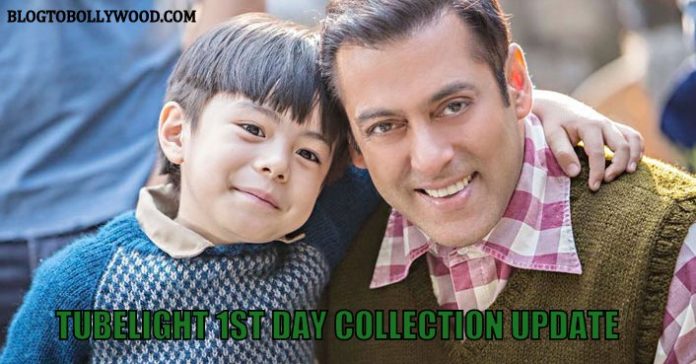 The most awaited Bollywood movie of the year, Salman Khan’s Tubelight is finally in theatres now. The expectations were sky high as Kabir Khan and Salman are coming together after blockbuster movies, Bajrangi Bhaijaan and Ek Tha Tiger. While everyone is expecting Tubelight to take a bumper opening, it is off to an average start. The movie recorded 55% occupancy on the first day which is poor considering Salman Khan’s standard. Still, the start is good compared to the other Bollywood movies of 2017. Let’s have a look at Tubelight first day collection and occupancy report. (Read: Tubelight box office prediction)

Morning shows occupancy
Released on 4350 screens, Tubelight is off to an average start at the domestic box office. It has opened to around 35% to 40% occupancy in the morning shows which is less than Salman Khan’s recent releases like Sultan, Prem Ratan Dhan Payo and Bajrangi Bhaijaan. The start is good considering that it is a normal working day and the size of release. If the movie would have released on 3000 screens then the opening would have been around 60%. (Read: Opening day collection of Salman Khan movies) Evening shows occupancy
Tubelight witnessed good growth in the evening shows at the average occupancy jumps to 55%. High-end metros in Mumbai, Gujarat and Delhi have started to pick up. The growth in the night shows will decide the first day numbers.

The opening has been surely affected because of Ramadan and pre-Eid celebrations. The movie will see a huge growth in the coming days. Mass circuits have always been the true strength of Salman Khan films. It would be interesting to see how Tubelight performs in mass centres as it is not a typical Salman Khan masala film.

One thing is sure, Tubelight hasn’t got an expected opening. With such a grand release, everyone was expecting it to take a whopping 70% opening. In terms of occupancy, Tubelight has recorded the lowest opening compared to recent Salman Khan films. Salman’s last four releases have opened to incredible openings of around 70% to 90%.

Comparing it with the occupancy of other movies of 2017, Tubelight has got the third highest opening. It is even lower than Shahrukh Khan starrer Raees which clashed with Shah Rukh Khan’s Raees. (Read: Highest opening day collection 2017)

As per early estimates, Tubelight 1st day box office collection will be around 22 crores. This is an average start for a Salman Khan movie released on 4350 screens. The official numbers will be out tomorrow and it would be interesting to see where will Tubelight stands in the list of Salman Khan’s highest opening day grossers.

Salman Khan has disappointed us big time. The WOM of the public in negative. The reviews are also negative and we are assured that the movie will struggle after an extended opening weekend.

Note: You can bookmark this page as we will keep on updating it with official numbers today at 11:00 am. Share your views on Tubelight 1st day collection in the comments section.