Will the Tower Of God anime return for a second season? Before answering this question let’s dig deep into the Tower of God franchise. Tower of God is a South Korean manhwa webtoon series that debuted in 2010. It received official English translations by Line Webtoon beginning in July 2014. The webtoon series has garnered immense popularity over the years and is still ongoing. Chapter 516 was released on Dec 27, 2021.

The popular manhwa franchise released a mobile role-playing game in 2013 which also became hugely popular. Apart from the mobile game, Tower of God gets its anime adaptation in 2020 by Telecom Animation Film  The first season of the Tower of God anime comprises 13 episodes aired in Japan from April 2, 2020, to June 24, 2020.

The original network was Tokyo MX, and the English network was Aniplus Asia. The anime was directed by Takashi Sano, produced by Joseph Chou, and written by Erika Yoshida. Crunchyroll streamed the Japanese broadcast of the series as a co-production under its “Crunchyroll Originals” title.

‘Highschool of the Dead’ Season 2: Will We Ever Get The Second Season?

How anime community and fans responded to the first season?

Tower Of God’s first season was well received by the anime fans for its well-crafted content and visual animation. The critics also loved the series for its precise adaptation of the manhwa. In fact, Tower of God was one of the best animes of 2020.

Season 1 had 13 episodes. It’s been around a year since the last episode aired. The fans are now eager to know if there will be a second season of Tower of God.

Will there be Tower of God anime season 2?

We would like to tell you that there hasn’t been any official confirmation from the studio or Crunchyroll whether or not the series will return back for a second season. So let’s not get too excited about it, and let’s not expect anything too hastily.

Let’s try to analyze the possibility of the second season based on the source material and popularity. Tower of God manhwa has been going on for more than 10 years now. There is no shortage of source material as season 1 has just 13 episodes.

Coming to the popularity, we have already mentioned that Tower of God was one of the best anime shows of 2020. Season 1 received a superb response and the fans have been demanding more episodes ever since the first season ended airing.

Also, the first season of anime, along with the manhwa webtoon, has made quite a massive profit, enough for the makers to go ahead with Tower of God season 2. In no way it can be a one-season anime.

Tower of God Season 2 hasn’t been officially renewed yet. So, saying anything about its release date would be too soon. Speaking to Anime News Network earlier this year, director of Crunchyroll, Carter Hahnselle said: “I can’t share too much more beyond that right now, but again we’re so glad that fans all over the world have been enjoying the show.”

If season 2 gets a clearance from Crunchyroll and the animation studio starts working on it in the next couple of months, we can expect the Tower of God Season 2 to premiere in 2023.

The plot of the Tower of God revolves around a boy, Twenty-Fifth Bam. Yeah, a boy with this strange name. In Korea, Bam means ‘Night’ though the name gives a spiritual significance to a Messiah. So the plot revolves around this Bam guy, and his life revolves around a Tower at the back of which he lived and his best friend, Rachael.

Though when Rachael entered that Tower, Bam was ravaged. Now, Bam is ready to drive to any limits to see Rachael again, even if he is to die in the attempt. The rest of the story circles around his journey through the tower, and he meets many allies that help him in the mission.

News about the Tower of God manhwa writer

The writer of manhwa S.I.U aka Lee Jong Hui was on a break as he was suffering from wrist and back pain. The primary reason for it is that he kept doing his work regularly, taking no rest. He also had some mental health concerns. This news was a setback for the fans. However, after an extended break, S.I.U. – AKA Lee Jong Hui resumed the series as a writer in Nov 2020.

How many episodes will season 2 comprise?

Another important question about the Tower of God anime is how many episodes would it include. The first season of the anime had 13 episodes that started airing on April 1, 2020 and were aired till June 24, 2020.

There is enough source material left, enough to make not even two but three seasons of Tower of God. As per our prediction, the second season would also consist of around 12 to 15 episodes, and if also replicates the same success, then the studio would go ahead with the third season. 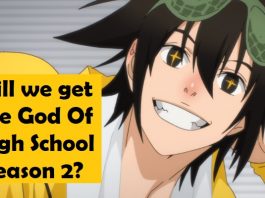