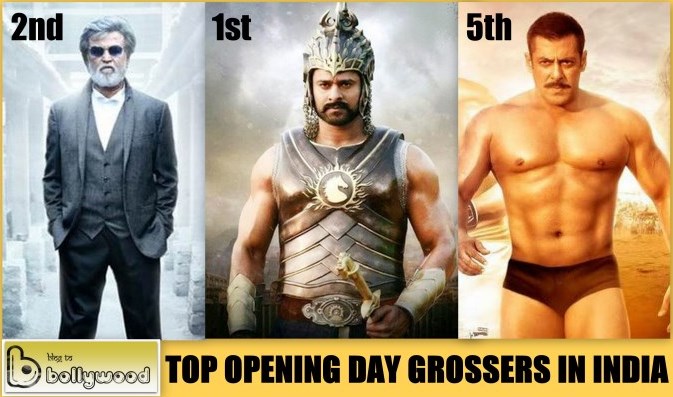 The second instalment of Baahubali series, Baahubali: The Conclusion was released yesterday. Directed by S.S. Rajamouli, the movie stars Prabhas, Rana Dagubatti, Anushka Shetty, Satyaraj and Tamannah in the lead roles. As predicted by us, the movie opened to record-breaking numbers across the country. (Read: Baahubali 2 1st day collection)

Released on 6500 screens in four languages, Baahubali 2 smashed all opening day records. It registered 95% occupancy on the first day which is an all-time record in Indian cinema. As per the reports coming, Baahubali 2 first day collection (all languages) has crossed 100 crores mark. These are insane numbers as the second best opening day numbers belongs to Rajinikanth’s Kabali which collected 47.7 crores on the first day. The first day collection of Baahubali was 42.1 crores

Talking about the highest opening day grossers of all time in India, the top three positions are held by south Indian movies. Salman Khan’s Prem Ratan Dhan Payo is at the fourth position followed by Happy New Year and Sultan. Remember, we are talking about the nett collection of the movies The gross collection of south Indian and Bollywood movies differ as the later have low entertainment tax. Without any delay, let’s have a look at the movies with highest opening day collection in India. As you can see, the top two positions in the list are acquired by the south Indian movies. Salman Khan’s Tubelight and Tiger Zinda Hai, Akshay Kumar’s Robot 2  are also expected to make it to the list.