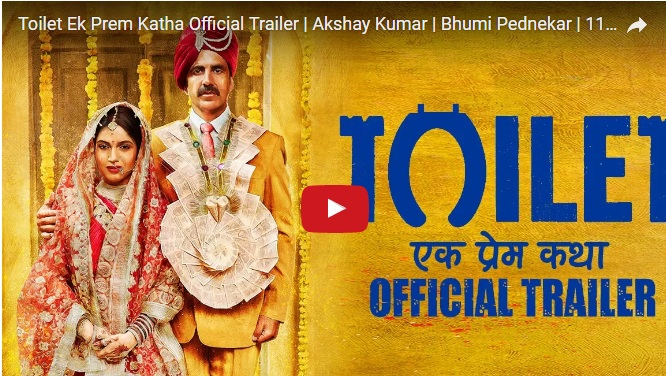 The trailer of Akshay Kumar’s upcoming satirical comedy Toilet: Ek Prem Katha’s has been released. The movie has been in news for a long time as it is based on Prime Minister Narendra Modi’s Swachh Bharat Abhiyan. The film brings forward the issue of sanitation and personal hygiene which is a rarely talked issue in the country despite the problems and shame associated with it.

Akshay as always impresses us with his funny one liners and impeccable comic timing. He is playing a role of a role of an unsophisticated man. Akshay gets married to Bhumi Pednekar who is playing a fierce woman. How she compels Akshay to fight for the sanitation issues in the village and how Akshay manages to do it is what makes the crux of the film. Watch the trailer here:

The film deals with a serious issue of sanitation in villages. An issue which we always think off in our minds but very rarely talk about. The movie will give a huge boost to Modi’s Swachh Bharat Abhiyan. Expect the movie to be a tax-free from the very first day.

The film boast on strong storyline and good performances from the supporting cast which includes names like Divyanshu Sharma, Anupam Kher and Sana Khan. Chairman Central Board of Film Certification (CBFC) Pahlaj Nihalani has already recommended the movie for the tax-free status.

It seems that Akshay Kumar will continue his dream form at box office. Produced by Neerja Pandey and Akshay Kumar, the movie will hit the screens on 11 august, 2017.