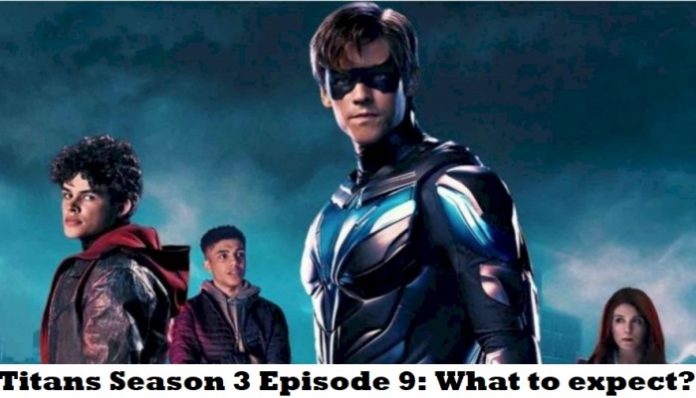 Titans Season 3 Episode 9 titled ‘Souls’ will premiere on this date on HBO Max.

DC’s superhero show Titans is running at a good pace and sitting at over halfway through its third season run. The third season of the dark and intense superhero drama has impressed the viewers with its twists and turns. As Titans continues to protect the Gotham city, the team faces several challenges. Episode 8 of the third season shows Scarecrow finally manages to release his fear toxin into Gotham city water supply. What will happen next? How would Titans save the city? Here’s everything you need to know about Titans Season 3 Episode 9.

In episode 8 titled Home, Gar and Molly discuss ways to redeem Jason who is under the influence of Scarecrow’s drug. After spending a night together, Conner and Blackfire attempt to help Kory begin to experience new visions. Elsewhere, Tim Drake deduces Dick Grayson’s secret identity. On learning that Dick Grayson is actually Nightwing, Tim arrives at Wayne Manor seeking to become the next Robin.

Dick turns him down. He suffers a head injury that causes him to hallucinate. A guilt-ridden Jason contacts Dick to surrender himself and Crane at an isolated pumping station. Crane secretly overhears their conversation.

The Titans argue whether Jason should be taken back in after his criminal actions that led to Hawk’s death. The Titans decide to meet Jason and arrive at a plumbing station. Meanwhile, Scarecrow setups the plan to beat the titans. Crane tricks Kory into attacking him with her powers, causing a massive explosion that releases the toxin into Gotham’s water supply.

Titans Season 3 Episode 9: What to expect?

The 9th episode of Titans season 3 is reportedly titled ‘Souls.’ It will focus on the events after the toxin gets released into Gotham city’s water supply. It would be interesting to see how Titans save the people from this poisonous toxin? Will Tim survive after suffering a heavy gunshot? Well, there are a lot of events going to happen in the upcoming episodes and we are pretty excited.

Where to Watch Titans Season 3 Online?

Titans is HBO Max exclusive show in the United States. Titans’ season 3 episode 9 will be available to stream on HBO Max on Sep 23, 2021, at 3:01 am EST. HBO Max subscribers can watch the series at no additional cost. Viewers can also watch the series on Hulu,  Amazon Prime Video, Spectrum, YouTubeTV, and DirecTV by subscribing to the HBO Max add-on through these services.

What Titans is all about?

DC’s superhero show Titans is a live-action series based on the Teen Titans. It premiered in 2018 followed by the second season in 2019. The third season landed on HBO Max on Aug 12, 2021. The series portrays a group of young heroes who join forces in their fight against evil.

Titans Season 4 Release Date and Everything You Need To Know