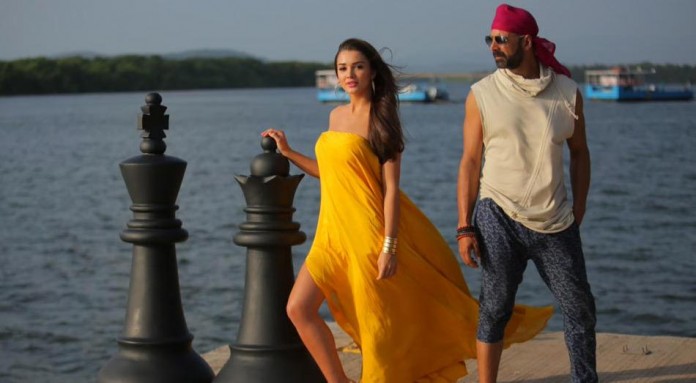 Akshay Kumar’s fourth release of the year Singh Is Bling is all set to hit the theaters on 02 Oct 2015. The movie also stars Amy Jackson and Lara Dutta. The movie is directed by Prabhu Deva whose last two releases Ramaiya Vastavaiya and Action Jackson were big flops at Box Office. Singh is Bling is a big movie for all the actors associated with it. Akshay is looking for his first 100 crores grosser of 2015, while Prabhu is hoping for a big hit after a debacle of Action Jackson. Amy Jackson would be hoping to make it big in Bollywood with Singh Is Bling.

Also read: Singh Is Bling is heading towards a 20+ crore opening day

Let’s have a look at factors which will play an important role in deciding Singh Is Bling Box Office Collection and Verdict.

Singh is Bling Box Office Collection – Positives with the movie

1) Akshay Kumar’s recent form – Akshay delivered three back to back hits this year with Baby, Gabbar is Back and Brothers. The actor is in terrific form as far as Box Office is concerned.

2) Akshay-Prabhu deadly combo – Akshay and Prabhu worked together in Rowdy Rathode. The movie is the biggest hit of Akshay Kumar with collection of 134 crores.

3) Masala Entertainer – Singh is Bling looks like an illogical masala entertainer. That’s the irony but such movies generally works at the Box Office.

5) Release Date – Oct 2 is Gandhi Jayanti and with no big competition we can expect bumper opening from Singh Is Bling. Last two year Gandhi Jayanti releases opened to terrific response. Besharam in 2013 collected 21 crores on opening day while Bang Bang in 2014 collected 27 crores despite competing with Haider.

Singh is Bling Box Office Collection – Negatives with the movie

1) Starcast– Leave aside Akshay Kumar, the other members of the star cast are not well-known faces. Amy Jackson isn’t a big face in Bollywood while Lara Dutta is making a comeback after a long time.

2) Low hype and buzz – I may be right or wrong, but hype and buzz surrounding the movie isn’t great. Generally Akshay Kumar releases create quite a buzz before its release which isn’t the case with SIB.

3) Prabhu Deva’s recent form – Prabhu Deva’s debut movie Wanted was a big hit. Then he directed Akshay Kumar in Rowdy Rathode which was also a blockbuster hit. But, his last two releases Ramaiya Vastavaiya and
Action Jackson bombed at Box Office. It would be interesting to see how the director comeback with this one.

4) Singh Is Bling looks like a Punjabi movie released in Hindi. All the songs of the movie are Punjabi. The movie will surely attract large audience in Delhi, Punjab and North Indian sates bu at the same time it may
prove to be a disaster in other states which will surely be a big setback.