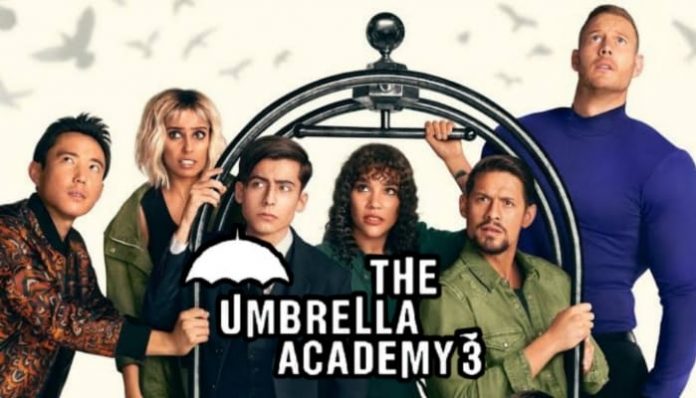 The Umbrella Academy Season 3 is about to premiere and here’s everything you need to know before you binge it.

The Umbrella Academy is a multi-genre American time travel superhero series based on a comic book of the same name. Steve Blackman serves as the creator of the show. The series stars Elliot Page, Tom Hopper, David Castañeda, Emmy Raver-Lampman, Robert Sheehan, Aidan Gallagher, and other prominent actors in crucial roles. The show premiered on Netflix on February 15, 2019, and the second season came out on July 31, 2020. Fans have been waiting for The Umbrella Academy Season 3 for nearly two years. Well, the wait is almost over now.

An announcement for the renewal of the series for a third season was made back in November 2020. Filming for the third season commenced on February 7, 2021, and got wrapped up on August 28, 2021. The Umbrella Academy Season 3 is now all set to premiere on Netflix on June 22, 2022. The announcement was made on the official Twitter handle, with a short teaser.

Netflix releases the new content globally at the same time. So, you need to check what’s the time in your location at 12:00 am PT. For your convenience, we have listed down The Umbrella Academy premiere date and time in various time zones.

Netflix released the official Trailer of The Umbrella Academy on May 19, 2022. Witness this action-packed piece if you haven’t yet. We see The Umbrella and The Sparrow Academy in front of each other, ready for hand-to-hand combat. Who will win? That’s what we will be seeing. Although, it’s just a matter when they team up, however, only if The Umbrella Academy returns to its timeline shortly.

The Umbrella Academy Season 3 will comprise 10 episodes in all, like the previous two seasons. Both Blackman and Jeff F. King have directed the episodes this time. Also, the titles of all the episodes were revealed recently, which we have mentioned below.

What to expect from the third season?

The official website of Netflix Tudum has made it easier for us to know what the third season will be all about. The official plot details read:

“Brellies, get your briefcases — The Umbrella Academy Season 3 premieres June 22. The last time we saw the Umbrella Academy, they had just stopped 1963’s doomsday. Convinced they prevented the initial apocalypse and fixed this timeline for good, they return home to the present day. However, the celebration is short-lived when the crew realizes things aren’t exactly (okay, not at all) how they left them. Enter the Sparrow Academy…

About as warm as a sea of icebergs, the Sparrows immediately clash with the Umbrellas in a violent face-off that turns out to be the least of everyone’s concerns. Navigating challenges, losses, and surprises of their own — and dealing with an unidentified destructive entity wreaking havoc in the universe — the Umbrellas need to convince Dad’s new family to help them put right what their arrival made wrong. Will they find a way back to their pre-apocalyptic lives in the upcoming season? Or is this new world about to reveal more than just a hiccup in the timeline?”

Who all will appear in The Umbrella Academy Season 3?

All the eight main cast members will be reprising their respective roles in The Umbrella Academy Season 3.

Apparently. Elliot Page will no longer play Vanya Hargreeves, rather he will play a different, revised version, Viktor Hargreeves. Additionally, Justin H. Min will be Number Two in The Sparrow Academy this time. The other main characters reprising their roles in the third season are:

Netflix Geeked event announced that the young Euphoria star, Javon “Wonna” Walton will also be appearing in The Umbrella Academy Season 3. However, no details have been revealed as to what character he will be playing.