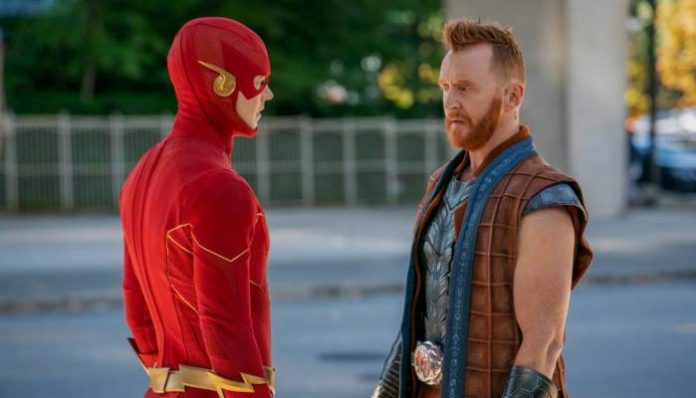 The Flash Season 8 Episode 2: Here’s everything you need to know about the next episode of ‘The Flash’ titled ‘Armageddon, Part 2’.

The Flash Season 8 premiered on Nov 16, 2021, on The CW. The fans have been looking forward to this season as it starts with five-episode crossover episodes. Superheroes from the CW-verse will come together in new episodes. Season 8 of The Flash started with a bang with the return of the time-travelling supervillain Despero. Another Arrowverse hero Ray Palmer returns to help Berry cope up with Despero. You can read more about Season 8 Episode 1 in the recap section below. For now, let’s talk about The Flash Season 8 Episode 2 in detail.

Where to Watch The Flash Season 8 Episode 2 Online?

If you fail to watch the episode on TV, you can also watch it on The CW’s official website using cable connection credentials. You can stream new episodes the next day on the CW app. The new episodes will be available to stream on live TV streaming services such as Xfinity, DirecTV, Fubo TV, Youtube TV, Hulu Live TV, and Apple TV.

New episodes will be available to watch the next day on Netflix but in some selected regions only including India. Netflix users in the United States have to wait for The Flash Season 8 to arrive on the streamer. It will drop on Netflix 8 days after the season’s finale on The CW. Meanwhile, the first seven seasons of ‘The Flash’ are available to stream on Netflix.

Shortly, the real action begins when a group of supervillains called the Royal Flush Gang plan to run major heists on a group of casinos. Meanwhile, Ray Palmer arrives in Central City for a tech convocation. Chester P. Runk floors him with a group of tech startups, but Ray turns them down.

Though Ray Palmer hopes to not indulge in any superhero consignments, Despero arrival at the tech convocation forces him to wear his suit again. Taking his identity as the Atom, he Supports Barry in fighting Despero.

Ray decides to create an organization in Chester’s father’s name that will help new startups. Meanwhile, Despero alleges that The Flash would be responsible for causing a disastrous catastrophe in the year 2031. Barry tries to show his good side to Despero, who ultimately gives him seven days to prove his innocence.

Episode 2 of The Flash Season 8 is titled Armageddon, Part 2 is directed by Menhaj Huda and written by Jonathan Butler & Gabriel Garza. The next episode will focus on Berry trying hard to prove his innocence but a devastating revelation from Iris pushes him to the edge. He will take help from another superhero Black Lightning.

Check out the full The Flash season 8 episode 2 synopsis below:

“THE FLASH SEEKS HELP FROM BLACK LIGHTNING – Despero (guest star Tony Curran) warns The Flash (Grant Gustin) that great tragedies will befall the speedster and cause him to lose his mind. Once that happens, Armageddon will begin. Determined to prove Despero wrong, Barry doubles down on proving his innocence but a devastating revelation from Iris (Candice Patton) pushes him to the edge and sends him to seek counsel from Black Lightning (guest star Cress Williams).”

How many episodes are there in The Flash Season 8?

The Flash season 8 started airing on The CW on Nov 16, 2021. It comprises 18 episodes like Season 7. The five-episode Armageddon event started on Nov 16, 2021. will then conclude on Dec 14, 2021. After the five episodes, the show will go on a mid-season break before returning in March for the remaining 13 episodes.

The CW Sets Finale Dates for All American, Legacies, Flash and 6 Other Originals

The Flash Season 8 Netflix Release Date: When Will The New Season Be On Netflix?