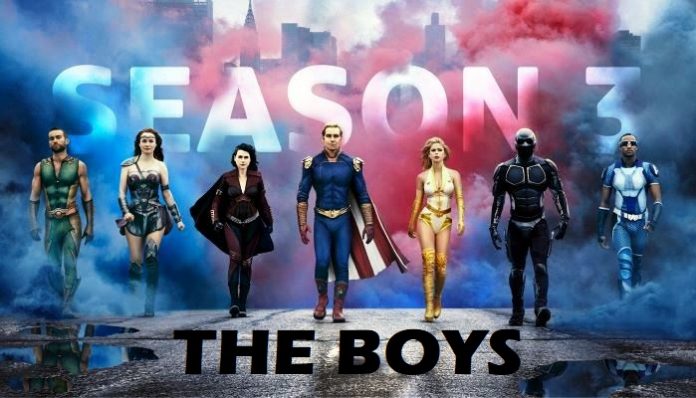 The superheroes are back! The Boys Season 3 premieres on June 3, 2022. Here’s everything you need to know about the new season.

The Boys is an American superhero web series based on the comic book of the same name by Garth Ennis and Darick Robertson. Created by Eric Kripke for Amazon Prime Video, the show debuted on July 26, 2019. Since then, it is garnering rave reviews from critics for its storyline, humor, writing, and remarkable acting, especially that of the two leads, Karl Urban and Antony Starr. Soon after the successful first season, Prime Video renewed the series for the second season which debuted on Sept 24, 2020. Now, is the time for the most-awaited third season of the series which is set to debut in a few days.

Season 3 will make its premiere on Prime Video on June 3, 2022. The third season consists of eight episodes, three of which will debut on the premiere date. After that, one episode will drop each week until the finale on July 8, 2022.

Is there a trailer for a new season?

Yes, the trailer is out and it suggests that we will witness some true madness in the upcoming season. Based on the trailer, it looks like it’ll be the most spine-chilling, funniest, and dark season of the live-action series yet.

The trailer opens with Butcher injecting himself with the Compound V substance and begins to shoot lasers out of his eyes. His immense strength becomes even more noticeable when he makes light work of a supe.

Jensen Ackles is debuting as Soldier Boy. The trailer shows him in flashback scenes with his famed shield.

The show is set in a universe where superpowered individuals are considered heroes. Vought International, a powerful organization, owns these corrupt and arrogant heroes. This corporation markets and monetizes them. The plot focuses on two superhero groups. The first includes The Seven, Vought’s premier superhero team led by Homelander. Others are the titular Boys, a group of vigilantes with Billy Butcher as their leader. They set out to take down corrupt superheroes who abuse their superpowers.

The Boys Season 2 was quite a spine-chiller for all the fans. Butcher faced the death of Rebecca and that too by her only son, Ryan. Karl Urban (Billy Butcher) expressed his feelings, “Butcher’s in a devastated place. He has definitely lost the love of his life. It was some of the most intense, heavy experiences that I’ve had on any set.” So we’ll be seeing him in a dark place, completely heartbroken.

Coming to the Soldier Boy, we believe that he would be the main focus of Season 3. As per the comics, he was a very popular icon at the time of World War 2. Consider him as Marvel’s  Captain America of ‘The Boys’ and there are many factors in support of that. Especially since he has short hair and remains clean-shaven. While the central plot of Season 3 remains under wraps, the synopsis suggests that the new season will kick off an ultimate war between The Boys and The Seven. Here’s the synopsis:

“It’s been a year of calm. Homelander’s subdued. Butcher works for the government, supervised by Hughie of all people. But both men itch to turn this peace and quiet into blood and bone. So when The Boys learn of a mysterious Anti-Supe weapon, it sends them crashing into The Seven, starting a war, and chasing the legend of the first Superhero: Soldier Boy.”

The majority of the main cast is returning for the third season. It includes Antony Starr as Homelander, Karl Urban as Billy Butcher, Jack Quiad as Hughie Campbell, and Erin Moriarty as Starlight. Giancarlo Esposito, Chace Crawford, Dominique McElligott, and Jessie T. Usher will also reprise their roles.

Soldier Boy is a new character among these, to be tackled in Season 3, played by Jensen Ackles. He will be giving a tough reference to the ‘Captain America’ of MCU, which we already discussed in the plot section. Moreover, he also carries a shield, shown in the below tweet, which gives a more Captain America vibe. Eric Kripke told that Soldier Boy is “Homelander before Homelander”. And you can already guess that Homelander is gonna feel quite threatened after his addition.

Apart from these, the recurring characters mentioned below will be returning in Season 3.

Supersonic is a new character among the recurring ones. Additionally, Eric Kripke teased that Love Sausage might also come back in Season 3.

According to Rotten Tomatoes, other newcomers include Laurie Holden, Sean Patrick Flanery, Miles Gaston Villanueva, and Nick Wechsler. They’ll play various new Supes, who may help fuel the war promised in the synopsis.

What else do we know about The Boys Season 3?

Showrunner Eric Kripke told Entertainment Weekly that the new season takes place about a year after the events of season 2. He said that “everything is mostly under control” at this point. Of course, it’s unlikely to stay that way. The new season will also feature the “Herogasm” storyline from The Boys comics.

Karl Urban who plays Billy Butcher said that more shocking elements are to come in season three. “I promise you have never seen anything like it in the history of cinema. We went bigger this season. It’s a fun, intense roller coaster ride.”

Well, after all these claims we are super excited for The Boys Season 3. What about you? If you haven’t watched the first two seasons of The Boys, do watch them on Prime Video before Season 3 premieres on Jun 3, 2022.