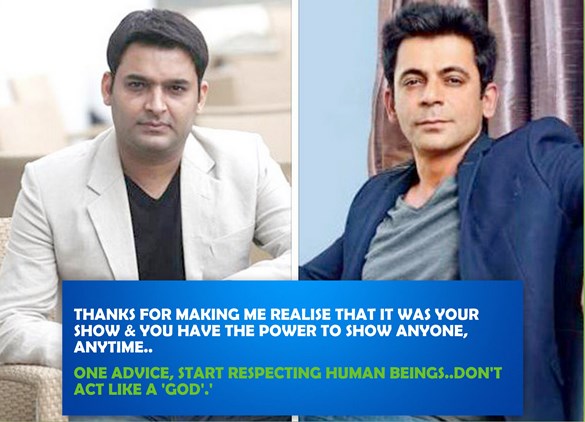 The fight between Kapil Sharma and Sunil Grover has taken a new turn and it seems that Kapil will have to pay for it. The incident has certainly raised eyebrows on his behaviour.

Yesterday only, we reported you, how Kapil Sharma confirmed misbehaving with Sunil Grover on a flight back to Mumbai. In a long post on Facebook, Kapil in a very funny way apologised to Sunil Grover and asked others not to take the things seriously.

After Kapil’s apology, Sunil Grover took to twitter and wrote a disheartening note which has won our hearts. The tweet also suggests that Sunil is quitting the show. Here’s a tweet:

Well, this post must have given sleepless nights to Kapil as it clearly indicates that Kapil has to pay a big price. Firstly, Sunil Grover is quitting the show which will surely impact the viewership by a big margin.

Moreover, this incident has certainly affected Kapil’s popularity. It has raised eyebrows on his behaviour with public and fellow mates. Kapil seems to have realised his mistake as he tweeted:

@WhoSunilGrover today packed up at 6 am after so long n I missed so many things.. love u .. see u in evening at ur home

Sunil’s hard hitting post has won our hearts and has raised our respect for him. What are your views on the above story? Share your thoughts with us in the comments section.