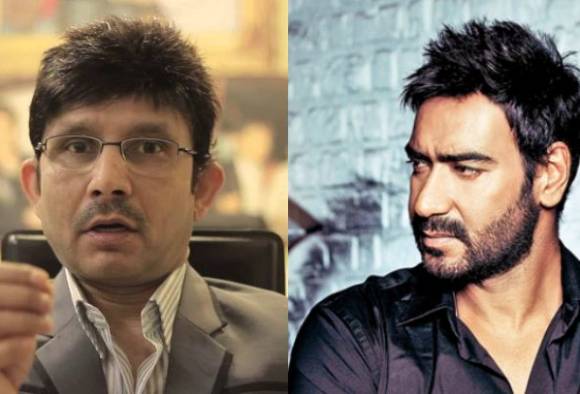 KRK leaked clips from ‘Shivaay’. Yes,  Kamaal R Khan posted parts of the movie online. He tweeted the first scene of the film and even though he deleted the tweet within minutes, the team of Shivaay is pissed with him and rightly so.

“#Shivaay is starting with the trailer of next flop #RockOn2,” he wrote with the clip. He followed it with yet another tweet, “First scene of Shivaay,” and shared the clip. The clips were widely shared but KRK appeared to have realised his mistake and pulled it off the net. And that happened when Vox Cinemas, the theatre where he was watching the film, was notified. The theatres official handle tweeted, “@kamaalrkhan Hey KRK. We’re sure you’re excited to watch #Shivaay, however using recording devices inside the cinema is strictly not allowed.”

The clips were widely shared but KRK appeared to have realized his mistake and pulled it off the net. And that happened when Vox Cinemas, the theatre where he was watching the film, was notified.

The theatres official handle tweeted, “@kamaalrkhan Hey KRK. We’re sure you’re excited to watch #Shivaay, however using recording devices inside the cinema is strictly not allowed.”
KRK answered on Twitter, “For your information, I haven’t recorded anything at all. I took a pic of Title #Shivaay only. @voxcinemas.”

KRK went on to reveal important details about the film’s plot. He tweeted:

“ Let me clear, #Shivaay is a story of prostitution problem in Bulgaria, so what Indian audience has to do with it? Why will Indians watch it?”

“Story started by 9 years old memory and Since last 15 minutes Ajay Devgan Sahab is jumping in the mountains! #Shivaay.”

“30 minutes gone and Ajay Devgan sir is still climbing mountains only so I really don’t know if he has made #Shivaay to show mountains only.”

“What a great bad film #Shivaay! #Himmatwala is #Sholay n #ActionJackson is #MughalEAzam compare to this waste of time, money n energy!”

Ajay Devgn has been at pains to keep the plot of his film secret. Even the film’s trailer or songs have not given away much till now.
This face-off made people online discuss if this was the result of KRK and Ajay Devgn’s spat a few weeks back. Ajay had shared a telephonic conversation between his partner and KRK on social media. In the conversation, KRK was heard claiming that he was paid Rs 25 lakh by Karan Johar to promote his film Ae Dil Hai Mushkil. Karan’s film is clashing with Shivaay at the box office. KRK later retracted his claims in a press conference.

Even though KRK had earlier slammed the trailer of the film, this time the intensity of the damage is way more severe. From ranting against Ajay Devgn on Twitter to hosting a press conference to tell the world that it was a joke, KRK is doing all he could to trouble KRK. Even when makers didn’t take the earlier damage seriously, now reports claim that the team may initiate legal action against Kamaal R Khan for leaking parts of the movie.

In an interview with Bollywoodlife, Shibasish Sarkar (COO, Reliance Entertainment) revealed, “We are taking strict legal action and filing a complaint with the cyber crime in Mumbai. We have also written to all the social media platforms like Twitter, YouTube and Facebook too coz when any kind of piracy happens, we take stringent action including criminal action.”