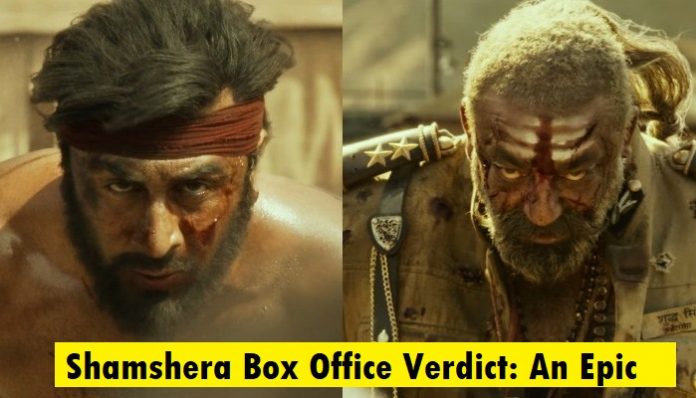 Released on July 22 amidst a lot of hype, Karan Malhotra’s directional Shamshera has tanked at the box office. The Ranbir Kapoor comeback movie was expected to bring some relief to the struggling industry but it has emerged as one of the biggest disasters of recent times. Well, the fate was sealed on the first day itself when critics and audiences penned it down.

Shamshera got off to a poor opening. It collected Rs 10.25 Crore on its first day. After underperforming on the first day, it failed to make any impact whatsoever. In its first weekend, Ranbir starrer collected around Rs 32 Crore.

While the fans were expecting the movie to hold on weekdays, it crashed on Monday and collected only Rs 2.9 Crore. The numbers continue to drop on weekdays. Here’s a look at the day-wise box office collection of Shamshera.

In the first week, the movie failed to even cross the Rs 50 Crore mark. It’s all over for Shamshera at the box office as new releases Vikrant Rona and Ek Villain Returns have taken over.

The total lifetime collection of Shamshera would be less than Rs 50 Crore. Mounted on a budget of Rs 150 Crore, Sharmshera is an epic disaster. It is one of the biggest flops for Ranbir along with Bombay Velvet and Jagga Jasoos.

Directed by Karan Malhotra, Shamshera is a period decoit drama. It stars Ranbir Kapoor, Sanjay Dutt, and Vaani Kapoor in lead roles. The movie is set in the 1800s and is about a dacoit tribe who took charge in the fight for their rights and independence against the British. For the first time in his career, Ranbir Kapoor is playing a double role. Sanjay Dutt plays the lead antagonist Shuddh Singh.