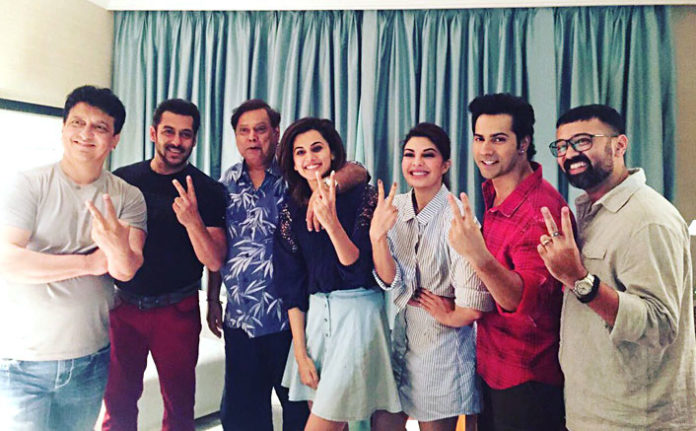 Salman Khan Is A Part Of Varun Dhawan’s Judwaa 2: Dabangg Khan himself shared the news on Twitter by posting a pic with film’s team.

The lead members of the star cast sound excited about Salman being the part of the film. They shared their feelings on Twitter and Instagram. Varun Dhawan posted a photo on Twitter and captioned it, “#Judwaa2 just got bigger. The man @BeingSalmanKhan is in it now”.

Jacqueline Fernandez shared a video on Instagram and wrote, “A picture may say a thousand words but I wouldn’t be able to upload enough to describe today! Around my favourite people who’ve been with me and supported me in my Bollywood journey since day 1! @beingsalmankhan @nadiadwalagrandson #daviddhawan @varundvn @kamera002 @taapsee thanks for being an awesome co-star to work with!! @beingsalmankhan thanks for making our film so much more special today!!! Will always cherish these #judwaa2 memories.”

Salman Khan is very close to David Dhawan and his family. He has been the part of multiple films directed by David Dhawan, some of them are Biwi No.1, Judwaa, Partner and Maine Pyar Kyun Kiya.

Judwaa 2 is a remake of Judwaa which released in 1997. The original movie was also directed by David Dhawan and it starred Salman Khan, Karisma Kapoor and Rambha. In Judwaa 2, Varun Dhawan will be reprising Salman Khan’s role while Jacqueline and Taapsee will step into Karisma and Rambha’s shoes respectively. Produced by Sajid Nadiadwala, Judwaa 2 will hit the big screens on 29 Sep 2017.