With the advent of the New Year 2020, your favourite On-demanding video streaming services, Zee is back with another season of January 2020 Resolution Binge. The first month of the year it will be all about binging through your favourite shows, film and TV series on the Zee 5 app as the makers have allowed a whole flavour for the season. With over 20 new shows with fresh content, January 2020 launch on ZEE5 looks like a promising initiative.

Do you also feel paranoid and empty on the inside when a show you’ve binged watch ends? Do you also feel the palpable anxiety when you’ve to wait for the next season to launch? If yes then you’re a certified TV shows addict who cannot help but love the whole idea of binge-watching a show in one-ago. The Zee 5 makers have introduced the January 2020 Resolution Binge, a month full of all the shows that you’d love to enjoy with a cup of hot coffee and a cosy blanket on a cold winter evening.

Especially for you, here’s a list and detailed account of ZEE5 New Releases January 2020 that will keep you entertained through the month.

What is touted to be the most sought after and loved Zee Marathi TV show has made its way through the list of shows in the January 2020 launch on Zee5. The Marathi show has Aadesh Bandekar, who goes on a journey to meet various Marathi housewives across the country. His trysts with those women are beautifully captured in the show.

If Bangla movies are your type then Panther has got to be a part of your binge-watch list. It is a Bengali action-thriller directed by debutante Anshuman Pratyush. The film boasts of a hero who single-handedly takes down a group of terrorists.

The classic 1975 film Bagh Bandhi Khela was directed by Haranath Chakraborty. The action drama thriller is a great masala-entertainer that will give you some time of light-hearted fun during the weekdays.

Your mothers and grandmothers will simply love Kahata Hanuman Jai Sri Ram. It is Hindu-mythological show based upon the life of Lord Sri Ram and his mystical journey through 14 years of exile.

The only show in Indian TV history that has had three equally successful seasons one after the other. If you’ve watched Gandii Baat even once, you cannot stop yourself from the watching the latest season out on January 2020 Resolution Binge.

The ZEE5 New Releases January 2020 added yet another epic show to its list with Kark Rogue. The Hindi-Bangla language medical-thriller show unleashes the dark side of the medical industry that has plagued the diagnosis system in India. The web-series is about the life of a surgeon who discovers some shocking truth about dead bodies at her place of work.

If you’ve been following the Marathi Super Stars, you’ll know those selected few talented souls who’ve finally made it to the top. These superstars will be felicitated on national TV at Maharashtracha Favourite Kaun, the Annual Event of ZEE Talkies

The hunt for the real Marathi Superstar begins with this show. Mena and women from all over Maharashtra gather to celebrate and showcase their talent in the hope of winning the title.

Ekta Kapoor is the goddess of Indian Television and the visionary proved it once again with Code M. The show based on the life a curious cat Lawyer Monica Mehra was added to the January 2020 launch on ZEE5.

The latest TV show will feature Kushal Badrike, one of the popular comedians in the Marathi television industry. The Marathi show based on the popular catchphrase Ali Mili Gupchili also stars Atul Parchure. The trailer of the family comedy-drama received a lot of love to ZEE5 social media pages.

Popular TV stars Nakul Mehta and Anya Singh beautifully portray the little nitty-gritty of the life of a regular Indian couple. Though both arguably deny their feelings for each other – It is clear that something is blooming between the ‘just-friends’ couple.

As the month of love approaches, Anaganaga, the first-ever Telugu series on the New Releases January 2020 bouquet makes for well-deserved entry. The show is a compilation of several short love stories that will keep you entertained for longer than you can imagine.

The spine-chilling attacks of 26/11 in Mumbai still terrorize most hearts in India. The warzone gave birth to some unique stories that were left unsaid during the chaos of life and death in the urban city centre. Here is a compilation of the best stories found so far.

The list of ZEE5 New Releases January 2020 list now includes the ZEE Punjabi launch too. The Punjabi viewers of ZEE5 will now be able to enjoy their favourite content in the Punjabi language too.

The 25th and 26th January holiday weekend will be filled with excitement as the ever-entertaining Zine Cine Awards will air on ZEE5 at night. As a part of the  January 2020 Resolution Binge, the Tamil awards will air in one go but the Telugu awards will go on air in two separate parts.

The makers have truly compiled an all-rounder list of shows that would be included in January 2020 launch on ZEE5. The month is a busy one for those who loved the #ResolutionBinge last year. 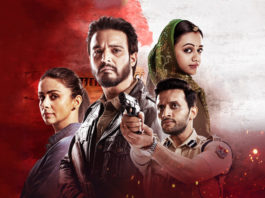 Rangbaaz Phirse Review: The nail-biting thriller is back with gut-wrenching action