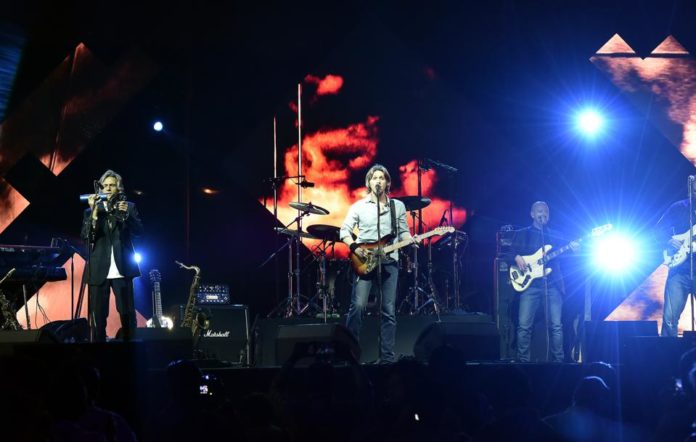 It’s always an experience to attend a rock concert. However, it supersedes only an experience and becomes a delight if there is a cause associated with it. We witnessed one such recent concert in Gurgaon, a concert by The Dire Straits Experience. The Iconic British band performed in Gurgaon, supporting the noble cause of providing drinkable water to Rajasthan villages. Organized by 100 Pipers Music CDs ‘Play For A Cause’, The Dire Straits Experience turned out to be an absolute delight.

The Dire Straits Experience consisted of some original band members and rest were new musicians. Chris White and Chris Whitten, who played Saxophone and Drums respectively, were part of the Dire Straits Band in the 1990s. While Terence Reis, leading on guitar, has been with Dire Straits for a few years now. These talented artists helped us relive the alluring melodies of the 80s. The band had visited India for the first time when we witnessed this concert and didn’t disappoint the crowd. They left the ambience electric with their performance, an epitome of how every rock concert should be. We were glad to witness such a grand rock concert in Gurgaon.

Starting with the song ‘Telegraph Road’ from their album ‘Love over Gold’, the band started with a low tempo, getting folks in the groove. Released in 1982, Love Over Gold was an epic album which truly reflects the spirit of 1980s. Leisure Valley in Gurgaon came to life with exuberance as the tempo and guitar strums became exhilarating. The sweet tunes brought back memories for many and enchanted by the performance, they threw their head back, closed their eyes and became one with music. The super talented musicians played in full harmony, ripping off the roof with energy and touching everyone’s hearts. ‘

After ‘Telegraph Road’, the band played some numbers from their popular album ‘Brothers in Arm’. The crowd went crazy and unprecedented energy levels dominated the arena when the song ‘Walk Of Life’ played. The concert continued for two hours with some super hit and cult classic numbers like ‘Money for nothing’ and ‘Tunnel of Love’. The epic concert ended with the classic rock song, ‘Sultan of Swings’. The rock music fans surely took away a memory to cherish forever.

The members of the band looked as excited as the audience. Chris White, saxophonist and an old member of Dire Straits, said, “It feels great to be here. Thank you so much for the love and it feels amazing to be associated with a cause for this tour. We are lucky to be doing good work in other parts of the world.”

Terence, the lead guitarist and vocalist, added, “It is because of you guys that we get to perform. Keep listening to our music.”

The Dire Straits Experience ended with a huge applause from the crowd, the band members thanked everyone and even indicated that this will definitely not be their last performance in India.

The power of music is certainly incredible and it can make you travel back in time. All you need to do is close your eyes and let the thumping music overpower your senses. The Dire Straits Experience concert did just that!

We were very glad to be a part of this concert and associated with its noble cause of supporting drinking water in Rajasthan villages. Cheers to music and life!