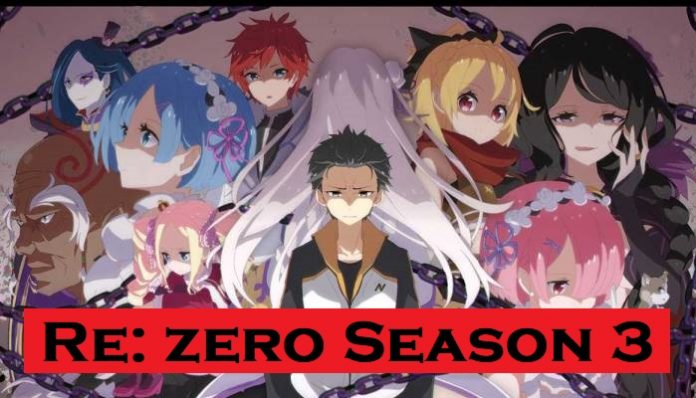 Re:Zero Season 3: When will the third season of the anime Re:Zero release? Is there a release date? What will be its plot?

Re:Zero franchise has achieved immense popularity over the years since the release of the novel series in 2012. Originally written by Tappei Nagatsuki and illustrated by Shin’ichirō Ōtsuka, the light novel series has 27 volumes, the last being published on Jun 25, 2021. Besides these novels, there are four side story volumes and six short story collections. The anime television series, that we all loved so much, adapts the light novel series.

Will we ever ger Re:Zero Season 3?

Will Re:Zero returns for the third season?  There is no official announcement yet. However, during an interview with Crunchyroll in June 2020, producer Sho Tanaka said, “I’m confident that you’ll all be clamouring for a third season once you’ve finished watching this one (season 2).” Well, this is a clear sign that the producers are considering the third season.

When will Re:Zero Season 3 release?

Re:Zero Season 1 comprising of 25 exciting episodes aired premiered on Apri4, 2016. The last episode of the first season aired on September 19, 2016. After making the fans wait for years, Re:Zero Season 2 eventually premiered on July 8, 2020. It had two parts comprising 13 and 12 episodes respectively. It concluded on March 24, 2021.

Now, talking about the release date for Re:Zero Season 3, there is nothing official. The previous season, which was released in two separate parts, was delayed due to the COVID-19 pandemic. It is difficult to predict when the Isekai anime returns for the next set of episodes.

There was a time gap of more than four years between the first and second seasons. Considering that the Studio White Fox follows the same pattern, we can expect Re:Zero Season 3 to start airing in 2024. Well, these are mere speculations and we should wait for the official announcement.

The fans are keeping an eye out for the third season and expecting that it would be more thrilling than before. Anyways, here are the four main characters of the series with their voice actors. They will certainly appear in Re:Zero Season 3 but there may be some new appearances as well. We’ll keep you posted as soon as we find something.

A recap through Re:Zero — Starting Life in Another World: Plot and Story

One of the most popular anime series Re:Zero revolves around the life of a teenager named Natsuki Subaru who initially lived a normal life in a modern city of Japan.
At the beginning of the series, they showed that the teenage boy was summoned to another fantasy world who does not have any idea about it nor he had any prior idea about its cause.

Very shortly after their transportation to the other world, Natsuki Subaru and his female friend with silver hair were killed but very fantastically he awakes to find himself alive, with the same girl and same thugs and the day was being replayed. He notices having to gain the special ability of ‘Return by Death’. His power was that he could rewind time by dying. He was determined to save his half-elf friend and opened the door to several conflicts and unfortunate events.

1) Who granted Natsuki Subaru his special ability of ‘Return by death’?

Natsuki Subaru was granted his special ability of ‘Return by death’ by the Witch of Envy, Stella during his transmission to the other fantasy world. He had no idea about this special ability until he was attacked and killed by the enemies but again returned alive to the repetition of the same day. He got to know about the ins and outs of his power after dying several times.

2) Why was Subaru granted the ability to ‘return to death’?

Although in the first season it was shown to the viewers about granting this special ability of ‘Return by death’ to Natsuki Subaru, it’s after the unravelling of the next season, when we got to know about its cause and so much more about the sorceress. Stella, the Witch of Envy, gave her the ability to Subaru out of love and goodwill as she wanted to save the lives of the people she loved and to achieve happiness in this whole action.

3) Will Emilia fall in love with Subaru?

Natsuki Subaru was a non-self man who tried to save her in the first place after they were attacked and was the first person to express her genuine and pure love towards Emilia. After various trials and conflicts, Emilia began to have subconscious feelings for Subaru during the latter half of Arc.

Where to stream Re:Zero anime?

The anime television series Re:Zero is much appreciated and well received by the viewers and critics because of its uniqueness in the story. Having multidimensional characters and plots, it’s an amazing story of self-improvement and self-discovery. After two successful seasons, fans are eagerly waiting for the third season.