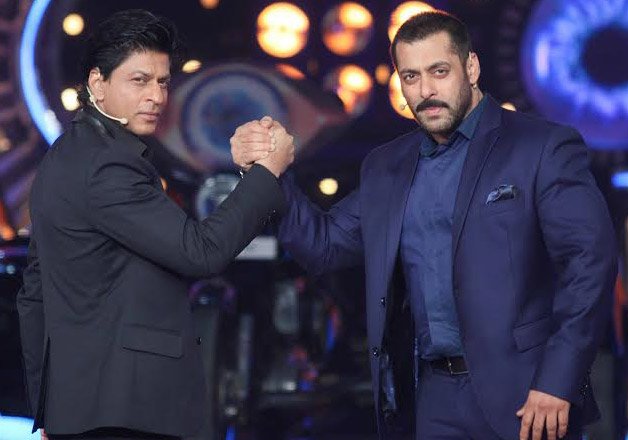 We are talking about the car which Shah Rukh Khan gifted to Salman as a thank you token for starring in his next film.

Last night, Dabangg Salman Khan was spotted travelling in a white brand new Mercedes-Benz. The car is question is reportedly gifted to him by his close friend Shah Rukh Khan as a thank you token for accepting a special cameo in his upcoming movie. The film we are talking about is a dwarf film to be directed by Aanand L Rai.

Apparently, Salman was accompanied by rumoured girlfriend Iulia Vantur and his friend and Dabangg co-star Sonakshi Sinha. Salman, Sonakshi and Iulia were spotted in Bandra returning from a friend’s party on Thursday night.

Here are few pics of the car: As per the reports coming, Salman Khan has a special cameo in Aanand L Rai’s film. The superstar will make a special appearance in the song, the shooting of which was completed on Tuesday. A report in Bollywood life says, “When Salman Khan came to shoot for the song, Shah Rukh surprised him by gifting him a brand new, luxurious car. Salman was shocked as he wasn’t expecting this at all.”

Shah Rukh and Salman Khan’s friendship has reached a new level in last two year. The two are helping each other is every possible way. Shah Rukh Khan promoted his movie Dilwale and Raees in Salman Khan’s show Bigg Boss. And when it was Shah Rukh’ turn, he accepted Salman’s invitation to star in his movie Tubelight. And now once again, Salman will feature in a special song in Shah Rukh’s next film.

Aanand L Rai’s film is one of the most awaited films of 2017. Shah Rukh Khan plays an intelligent dwarf man in the film and he will be accompanied by his favorite co-stars Anushka Sharma and Katrina Kaif.

The trio has earlier worked together in yash Chopra’s last film title Jab Tak Hai Jaan. Shah Rukh will be next seen in Imtiaz Ali’s Jab Harry Met Sejal in which Anushka Sharma is playing a leading lady.