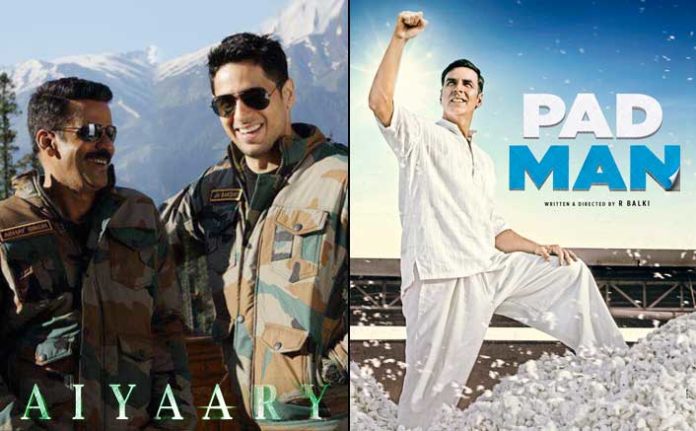 After a good opening week with the collection of 62.87 crores, Akshay Kumar’s Padman witnessed considerable drop in the second week. It earned just 2.1 crores on its second Friday. On its 9th day, the movie saw growth of around 50% and earned 3.1 crores. After nine days, the total collection of the movie stands at 68.07 crores. As predicted by us, the lifetime collection of the film will be around 80 crores.

These are good numbers for a niche film. Padman is the sixth consecutive hit film for Akshay Kumar since the release of Airlift in Jan 2016.

Neeraj Pandey’s Aiyaary has been able to make impact at the box office. After an average opening with the collection of 3.36 crores, the movie witnessed around 30% growth on its second day. As per the reports, the second day collection of Aiyaary will be around 4.64 crores. The total collection after two days stands at around 8 crores.

The trend is not looking in the favour of the film and it is likely to end its box office journey under 30 crores. Another flop for Sidharth Malhotra.

Hollywood film Black Panther had a promising opening as it earned 5.25 crores on the first day. However, the trend is not favourable as the movie witnessed just 20% jump on its second day. After two days, the total collection stands at 11.85 crores (including the paid previews). The movie is likely to end its box office journey well under 40 crores.