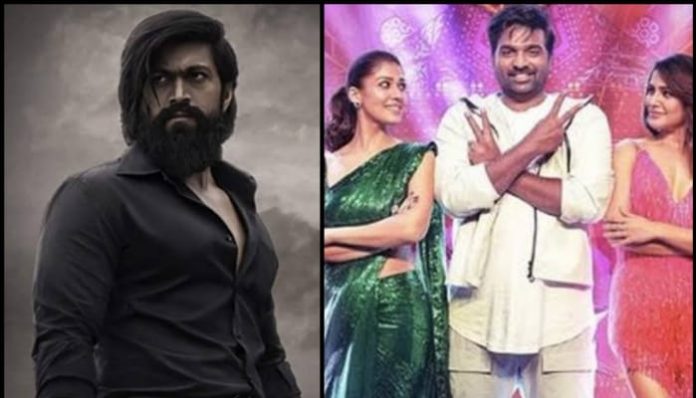 It’s been a big month for entertainment lovers as several big movies and shows debuted this month. We have entered the last week of May and it’s time to look at the new OTT releases. We hope that you have already watched 4 big south Indian movies that were released on May 20. Now, is the time to look at the south Indian movies releasing on OTT on May 27.

The biggest OTT release of the week is Yash’s KGF Chapter 2. Directed by Prasanth Neel, this one is a sequel to the 2018 action drama KGF Chapter 1 released in 2018. Released in theatres on April 14, KGF 2 emerged as a huge blockbuster with a worldwide collection of Rs 1200+ Crore.

Needless to say, there is huge anticipation about its digital release. KGF Chapter 2 is available to watch on a rental basis from May 19. The regular OTT release is expected tobe in the second week of June.

Next on the list is a romantic drama starring big names, Vijay Sethupathi, Samatha and Nayanthara. The movie revolves around a boy (Rambo) devoid of love and affection due to his destiny. Rambo (Vijay) falls for two women together, Kanmani (Nayanthara) and Khatija (Samantha). He argues why can’t a person fall for two people and stay with them.

The story revolves around a couple (Arjun and Madhavi) who recently got engaged. After the engagement ceremony, the first lockdown happens and the groom’s family is forced to stay back at the bride’s place. While Arjun is excited to get to know his fiancee, Madhavi has her thoughts. Will they both strike a chord and end up on a successful note? This forms the crux of the story.

The first part of the crime trilogy will premiere on Aha Tamil on May 27. The movie stars Praveen, Anjali Rao, Venkat Sundar, Jagan Krish, Seetharaman and Deena, among others, in pivotal roles.

Pothanur Thabal Nilayam takes place within two days and looks into how a mistake made by one person creates a ripple effect, becoming problematic for other people.

Produced by Sudhan Sundaram, and G Jayaram, Pothanur Thabal Nilayam is directed by debutant Praveen, who is also playing a lead role. He has earlier who worked as a technical director for Rajinikanth-starrer Kochadaiiyaan.

The Boys to Vikram, Top 6 Movies & TV Shows To Watch On June 5