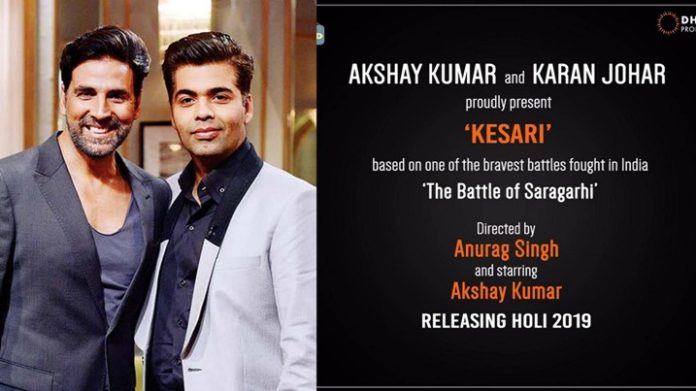 Karan Johar and Akshay Kumar are collaborating for the film based on Battle Of Saragarhi, titled Kesari. It will release on Holi 2019.

It is official now. Akshay Kumar and Karan Johar are collaborating for the first time. The film in question is based on Battle Of Saragarhi and it has been titled Kesari. Karan and Akshay made this big announcement today on their twitter accounts. “Extremely excited to see this exceptional and brave story unfold!!!.” KJo tweeted with a picture revealing the details about the film.

Earlier this year, Salman, Akshay and Karan announced the same film. Salman backed out of the project as his close friend Ajay Devgn is already making a film on the same subject. The film which Ajay is making has been titled ‘Battle of Saragarhi’ and it may release next year on Diwali.

Akshay Kumar has his hands full of movies. The actress will be next seen in 2.0 which also stars Rajinikanth and Amy Jackson. After 2.0, Akshay has Padman, Gold, Crack and Mogul in the pipeline.