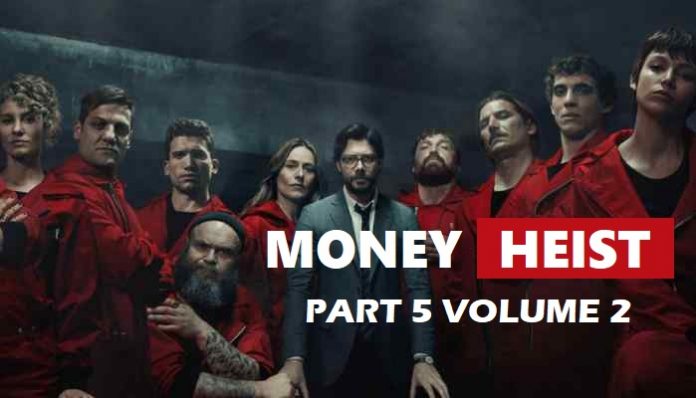 With less than a month left for the heist to come to an end, let’s discuss everything you would wanna know about Money Heist Season 5 Volume 2.

Ranking on the top of the “Most Watched Shows on Netflix”, Money Heist has won millions of hearts throughout its remarkable journey. We witnessed four nerve-thrilling seasons and half of the fifth one too, which indeed was one hell of a ride. The final moments of Money Heist Season 5 Volume 1 left a lot of questions unanswered, apart from leaving the fans stunned. So here we have jotted down all that we know about the Money Heist Finale.

The release dates for both the volumes of Part 5 were revealed a while ago before the release of Volume 1. On May 24, 2021, Netflix officially announced the dates with an action-packed teaser. La Casa De Papel aka Money Heist Part 5 Volume 2 is all set to premiere on Friday the 3rd of December this year, only on Netflix. Although they made us wait for 3 months, it will all be worth it when we get the last 5 episodes. The heist comes to an end.

What will be the Plot of Volume 2?

The final Episode 5 of Volume 1 was like a dagger to the hearts of all the fans. It breaks the gang from the inside, the Professor, in particular! Anyways, as we saw that now Alicia has no grudge against the Professor, things have completely changed in Volume 2. They are once again rivals and Alicia, is once again, the Queen of Bitches. This can be seen in the new trailer and a clip that we have in the below context. The biggest event that we’ll be witnessing in Volume 2 is the Professor entering the Bank of Spain! Not only this, his entry into the bank is worth waiting for.

The second volume will be covering several aspects. The grudge between the Professor, Alicia, and Colonel Tamayo. The Gang struggles again with those elite soldiers who are still alive and it seems that they’ve taken control over the gang. What will happen next is a big question that can be answered only by watching Volume 2. We may also see Berlin and his son, Rafael in flashbacks, the same goes with Nairobi. It’s good that we just wait for a while, December 3rd is afoot.

The first one we have here is the exclusive clip, a sneak peek into the Bank of Spain. Netflix released this at its International event, TUDUM. The Gang gets to know that the Professor has gone missing and now they’ve to decide how to get the gold out without anyone knowing. Take a look at that Exclusive Clip below.

The next is the official teaser that Netflix released a month ago. The End is Coming. The professor narrates, ” In the last few hours, I’ve lost people very dear to me and I won’t let anyone else fall because of this heist.” Most importantly, here we see the Professor with a gun! Below is the Official Teaser.

Next is another Exclusive Clip of Money Heist Part 5 Volume 2. This one was never posted by Netflix or any other official account but it’s not fake. We suggest you watch it by yourself.

Last but not least, is the ultimate Official Trailer for LCDP Part 5 Volume 2. This action-packed nerve-thrilling trailer we all have been waiting for begins with the Professor’s grand and honourable entry into the Bank of Spain. We have the full Official Trailer right here if you haven’t watched it already.

Money Heist streaming now with all the episodes only on Netflix. Binge Now!

What Time Will ‘Who Killed Sara?’ Season 3 Be on Netflix? Release Details

Roswell, New Mexico Season 4 Netflix Release Date: When Will Season 4 Be On Netflix US?