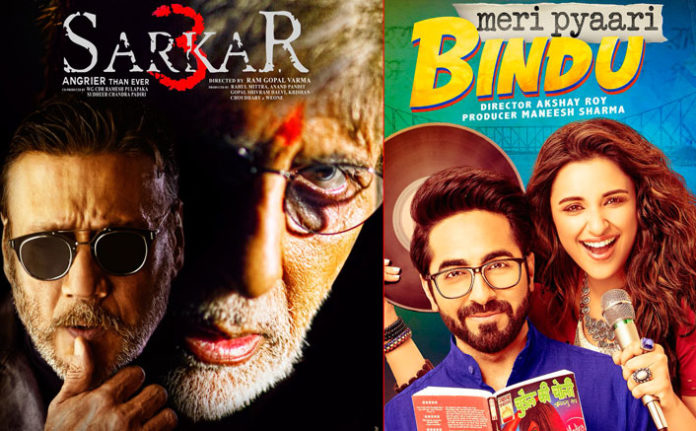 With Bahubali 2 fever still going strong, new Bollywood releases Meri Pyaari Bindu and Sarkar 3 have struggled big time at the box office. Both movies got off to a terrible opening on Friday and the same trend continued to Saturday as well. Both movies witnessed some growth on Saturday but that wasn’t enough as the opening was way too low. Let’s have a look at Meri Pyaari Bindu, Sarkar 3 2nd day collection.

Meri Pyaari Bindu has shown some growth on Saturday. The film collected 2.25 crores on the second day. Despite the growth, the box office numbers are low as the start was pathetic, to say the least. Ideally, the movie should have opened with 4 crores collection but that didn’t happen. The total collection of the movie after two days stands at 4 crores. Made on a budget of 22 crores, the movie needs to earn 30 crores to be called a hit at the box office. Considering the current trend, it seems that the movie will struggle to even cross 15 crores mark. Verdict: Flop.

Sarkar 3 failed to witness any growth on Saturday. It remained flat on its second day and managed to earn only 2.35 crores. The total collection of the movie after two days stands at 4.6 crores. Despite running on lower numbers of screens, Meri Pyaari Bindu is likely to surpass Sarkar 3 today. Considering the current trend, it seems that Sarkar 3 will wrap up its box office journey this week with the lifetime collections under 15 crores. Verdict: Disaster.