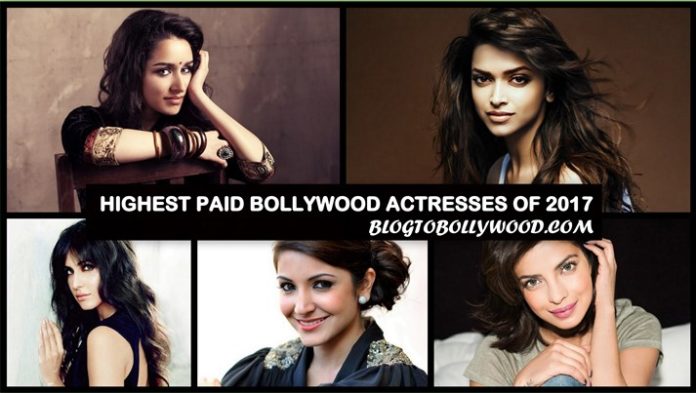 Deepika Padukone has become one of the most loved actresses in Bollywood. With hit films like Bajirao Mastani and Tamasha in her kitty, she has upped her signing amount of each film by a huge number. She takes about 15 crores for every project making her the highest paid actress in Bollywood.

Next in line is the badass actress Kangana Ranaut who takes an amount of 11 to 12 crores for each of her films. Kangana has established herself as the talent factory and she has proved that she does not need a big actor to make a film hit.

Kareena Kapoor Khan may not be doing a lot of movies in Bollywood ever since she got married to Saif Ali Khan, she has always been known to ask for a lot of money for her films. Her signing amount for each film currently lies in the range of 9 crores.

Katrina Kaif charges 8.5 crores to 9 crores for each film and with her polished acting skills, she has been in a lot of demand in Bollywood these last few years. Soon, she will be seen opposite Salman Khan in Tiger Zinda Hai.

Priyanka Chopra has been very busy in Hollywood these days with her show Quantico and her upcoming debut film Baywatch. It has been a while since she has signed a new project in Bollywood but the last time she did it, she took home an amount of 9 crores. We can only imagine how much money she will ask for now!

Anushka Sharma is the next name when it comes to considering the highest paid Bollywood actresses in 2017. Whenever she signs a new project, her money in the bank account in increased by an amount of 5 to 6 crores, plus she is also producing movies now.

Vidya Balan is one of the most talented actresses and she has been awarded the National Film Award too. She takes home a signing amount of 5 to 6 crores for every film she is a part a of and every time, she makes the money worth it.

The rising star of Bollywood, Alia Bhatt has grown up to be one of the most loved actresses in Bollywood. This has resulted in an increase in her signing amount as well. Currently, she takes around 4 to 5 crores for each film.

Sonakshi Sinha stands at number nine in terms of the signing amount for each film. She takes something around 3 to 4 crores for every film.

Shraddha Kapoor is one of the fresh faces that the audiences love to see on the big screen. This makes up for her signing amount that comes to a total of 3 crores for every single film.

What are your thoughts on the amount these actresses get for each film?

15 Times Kareena Showed Us How to Rock Maternity Styling!