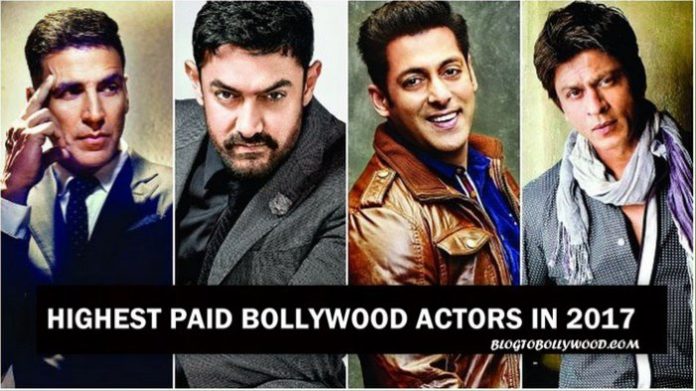 Aamir Khan’s Dangal was the biggest hit of the year 2016. The movie had a medium budget but it made a lot of profit and collected a total amount of 744 crores worldwide. Aamir Khan had 55% stakes in the movie which made him the highest earning Bollywood actor as he took home an amount of 164 crores.

Salman Khan stands at position number two thanks to his super-hit film Sultan. Though the film was not able to match up to the collection of Dangal, it was still able to collect an amount of 586 crores grossly. Salman Khan did not take any salary for the movie and decided to go for a 50:50 share in the film. This makes his the second highest earning Bollywood actor with around 110 crores in his pocket.

Akshay Kumar is one of the busiest leading men in Bollywood as he generally signs 3 to 4 films per year. Unlike the Khans, Akshay has a fixed salary for each film that ranges from 18 to 40 crores. He pocketed around 45 crores for Jolly LLB 2 and it is also being reported that he will be earning more than superstar Rajinikanth for his role in 2.0.

Most of the movies signed by Shah Rukh Khan are likely to be produced by his own banner. So, Shah Rukh Khan’s profit generally comes up to a total of 40 crores with a normally budgeted movie like his latest release Raees. The profit-sharing strategy and co-production value make Shah Rukh Khan fourth in line among the highest paid actors.

Hrithik Roshan is very choosy when it comes to signing films and even though he does only one movie in a year or sometimes even in two years, he still holds the fifth position in this list. The sole reason behind this is that he always charges large amounts of money for each of his films. For Mohenjo Daro, he charged around 50 crores while for Kaabil, h probably got something similar.

The frontrunner of the Kapoor clan, Ranbir Kapoor charges an amount of 30 crores for each project. The actor has a huge fan-following and even if his films do not do so well at the box-office, he still earns quite a lot from his producers.

Ajay Devgn is one of the most talented actors of Bollywood and he is known to get something around 25 crores for each one of his films. His latest movie Shivaay was written, directed and produced by him and the movie made quite a profit for him at the box-office despite clashing with Karan Johar’s Ae Dil Hai Mushkil.

The energetic new star in the block has grown a good reputation of his own in Bollywood. He charged 20 crores for Bajirao Mastani and gave a powerful performance in the movie. For his last release Befikre, he surely made something around that. He has even hiked the charges of his stage performances.

The most respected star of Bollywood and one of the most talented ones too, Amitabh Bachchan takes home an amount of 15 to 20 crores for each of his projects. In the last one or two years, he has started taking up more and more projects too.

The Nawab of Bollywood has dropped down to the tenth position and the reason behind it is that Saif Ali Khan is signing less and less number of films these days. His last release Rangoon bombed at the box-office despite being so talked-about. He hasn’t had a single hit in the last few years and this fact has majorly affected his income.

What are your thoughts about the highest paid Bollywood actors in 2017?