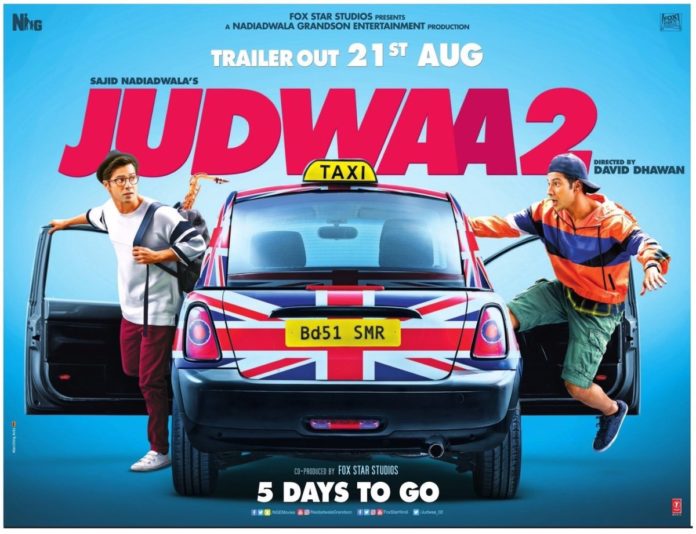 David Dhawan’s Judwaa 2 is one of the most awaited Bollywood remakes of this year. Starring fun actors like Varun Dhawan, Jacqueline Fernandez and Taapsee Pannu, the movie is slated for release on 29 Sep 2017.

On the occasion of David Dhawan’s 65th birthday, his son and the lead actor of Judwaa 2, Varun Dhawan shared the first look poster of the movie. The poster shows two Varuns, donning the ‘shareef’ and ‘tapori’ avatars. The lead actresses, Jacqueline and Taapse are missing from the poster and we will see them in the trailer to be released on 21 Aug 2017.

Judwaa 2 is a remake of 1997 super hit film Judwaa which starred Salman Khan, Rambha and Karisma Kapoor. The original one also directed by David Dhawan. Varun Dhawan is stepping into Salman shoes and it will be interesting to see if he can do justice with this funny role. Reportedly, Salman Khan has an interesting cameo in the film. Two super hit songs, “Oonchi Hai Building” and “Tan Tana Tan” were retained from the original film.

Produced by Nadiadwala Grandson Entertainment, Judwaa 2 is slated for release on 29 Sep 2017. The trailer of the film will be released on 21 Aug 2017.