Its been a long wait for Salman Khan fans.The Superstar is back on silver screen after almost 1 year and its really being a long time for his die-hard fans. With the kind of buzz that Jai Ho has created ever since the first poster was released, it can easily be predicted that it will get a tremendous opening at Box Office. Salman Khan has been the King of Bollywood for the last few years. Each of his last 5 movies have been Blockbusters at Box Office.

However,this time the scenario has changed. Jai Ho don’t have the positives and comforts which the last few releases of Salman had.

Jai Ho will be Salman’s first non holiday release in last 4 years. The music of the movie hasn’t been well received by the critics and audience and will definitely affects Box Office figures.  Salman Khan’s jodi with newcomer Daisy Shah is also not much liked by the audience.

What works in favor of Jai Ho is presence of Salman Khan. Jai Ho Box office fate depends totally on Salman Khan. Jai Ho will be the real test for him as there is nothing much in the movie to rely on. The movie is entirely riding on the star power of Salman Khan. Opening is surely gonna be big as Salman Khan is back on big screen  after almost 1 year. We are expecting it to collect around 25 to 27 crores on Opening Day.

Keeping all the above factors in mind lets have a look at the Day wise Box Office prediction of Jai Ho.

Advance Booking reports has been excellent and the movie is expected to have a big Opening this Friday. Its time to say Jai Ho, Jai Ho.

What are you expecting from Jai Ho. What are your Box Office predictions. Do let us know. 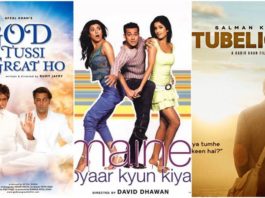 6 Salman Khan Films Based On Hollywood Movies We bet You...