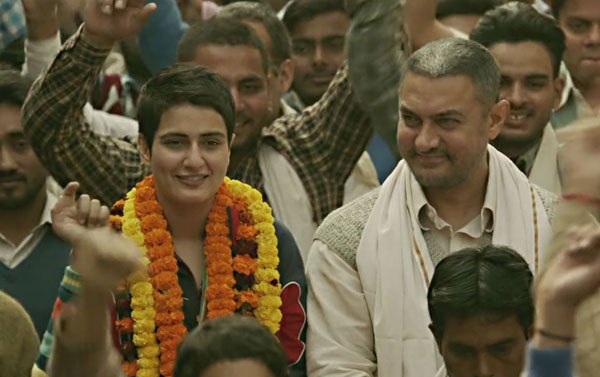 Aamir Khan’s ‘Dangal’ has emerged as a clear victor not just in the box office numbers but also by becoming a favorite among the masses this year. What makes this victory even more sweeter is the concept of girl empowerment that runs as the tagline of the movie – “Maari chhoriyan, chhoron se kam hai ke? “
This, from the state of Haryana, which is notorious for female feticide and female abuse.
Throughout the movie, runs the common thread of the Phogat girls taking up a sport largely considered a male arena in India.
Mahavir Phogat is determined to give his girls the chance that he himself missed in his athletic life. So much so that he wouldn’t balk at anything. When his daughters complain of head lice and head dirtying problems due to the wrestling practice in the mud, Mahavir gets the local barber to shorten their hair. This act pretty much sums up the pace of the movie. The daughters are now considered on par with the boys. Shalwar kameez is too restrictive a dress to run in the wee hours of the morning. So, Mahavir gets his daughters to wear shirts and shorts. Mahavir also explicitly asks his wife to refrain from making his daughters to work in the kitchens, thus making sure that his girls have ample of time for practice. Mahavir himself cooks non vegetarian diet for his daughters so as to ensure that his daughters do not lack the stamina required in a brawny sport such as wrestling. Whats more, Mahavir makes sure his daughters are not married at an early age. He tells his wife, “Mei hamari chorriyon ko itna kaabil banaunga ki woh khud ladke chunengi!”
Lets compare this movie with the life of an average or common woman in India.
Indian women are the most stressed out in the world, according to a recent study. The reason for this stress is that Indian women have a lot to accomplish in their lifetimes. Apparently academic excellence is not the only requirement. Culinary skills and domestic fluency needs to be inculcated as well. Once married, the Indian woman has to take up the double responsibility of home and career. Once a child is born, it is again the woman’s responsibility to ensure the child’s care. In case of joint families, the responsibility of the in-laws too falls on the woman’s shoulder.
If only we had a Mahavir in every home in India. We’d have an India that is just waking up to its true potential. An India, where women are not considered as second class citizens or relegated to a life in the kitchens. An India where women are not juat baby making machines. An India where women actually get their dues as a living, breathing entity capable of intelligent decision making abilities. An India where women are allowed to coexist peacefully.
An india where there is no restriction on the activities that a woman can do or the way she wants to lead her life.
That would be the day!!!