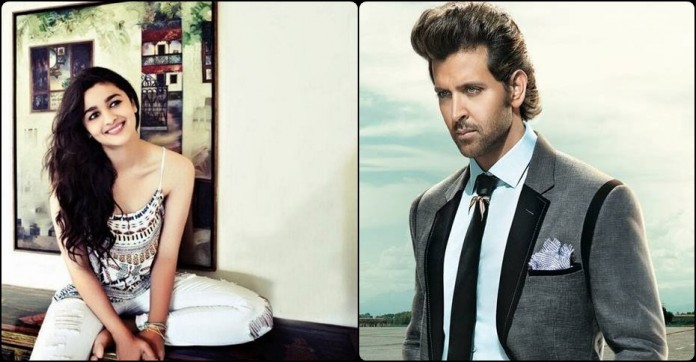 The mystery of who will be the leading lady in the third installment of Aashiqui is still unsolved. Now we hear that we will see Hrithik Roshan and Alia Bhatt romancing in Aashiqui 3!

There have been many many speculations about who will be the leading lady in third installment of Aashiqui opposite the Greek God of Bollywood- Hrithik Roshan. After the success of Dheere Dheere featuring Hrithik and Sonam Kapoor, it was said that they will be cast together in the movie. Then we heard the name of Kangana Ranaut, but that turned out to be quite bitter. Now, it’s being reported that we are going to see Hrithik Roshan and Alia Bhatt romancing in Aashiqui 3.

Yeah it’s a really odd pairing. But considering the fact that we are also going to see Shah Rukh Khan and Alia Bhatt together in Gauri Shinde’s next, seeing Hrithik and Alia would not be that odd. Infact, they may just make a super-hot couple.

According to a report of SpotBoye, Alia Bhatt has bagged the role leaving all the other speculated actresses behind in the race of being the leading lady of Aashiqui 3. The other details of the movie are currently being worked out.

On the work front, Hrithik is currently busy with Mohenjo Daro and after that, the actor will start shooting for Kaabil which stars Yami Gautam opposite him. Alia Bhatt is currently switching between Gauri Shinde’s film and promotions of her next Kapoor and Sons releasing on 18 march 2016.

Stay tuned for more updates about the movie! And do leave your comments about this new pairing of Bollywood. Will they look odd or hot together?