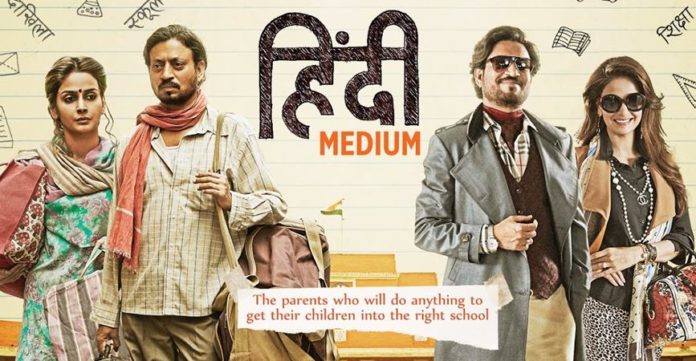 Before the release of Hindi Medium, I had a feeling that this movie may emerge as one of the dark horses of 2017. Well, this is what exactly happened. Irrfan Khan and Saba Qamar starrer Hindi Medium has emerged as the first surprise hit of 2017. Released with almost zero expectations, the movie has recorded superb first week at the domestic box office.

Despite the competition with Half Girlfriend and Bahubali 2, Hindi Medium performed exceptionally well on weekdays. On Monday, the movie earned 3.15 crore which is higher than the collection of the first day. It remained rock steady on weekdays and did a business of 3.30 crores,  3.10 crores on Tuesday and Wednesday respectively. As per early estimates, Hindi Medium 7th day collection will be around 3 crores. The total first week collection of the movie stands at 25 crores.

With the collection of 49.13 crores, Half Girlfriend is the 8th highest opening week grosser of 2017 after Bahubali 2, Raees, Kaabil, Jolly LLB 2, Badrinath Ki Dulhania and Half Girlfriend. It has beaten the first week collection of big budget movies like Rangoon, Ok Jaanu and Sarkar 3.

The total budget of Hindi Medium is 23 crores which include 8 crores of promotion and advertising cost. The movie needs to earn 30 crores to be called a hit. The producers claim that they have covered around 10 crores through music, satellite, overseas and digital rights. Considering the current pace, it seems that the movie will make it to the list of 2017 hit movies.

What are your views on Hindi Medium first week collection? Share your thoughts with us in the comments section.