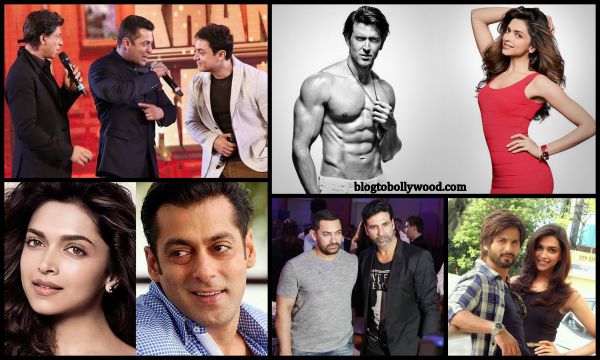 Real life Jodis are made in heaven by God but the Jodis in our Bollywood films are made by our filmmakers. Talking out the best Jodis of all time, Shah Rukh Khan-Kajol, Akshay Kumar- Katrina Kaif’s names pops up in our mind. Just like these fantastic on-screen couples, there are some fresh Bollywood Jodis we would love to see. Have a look:

1) Three Khans: Bollywood will not be completed unless the three Khans of Bollywood – SRK, Salman and Aamir Khan do a film together. Trade pundits exclaim, lets the Khans do a film together, it will cross all the barriers of records so far? And why not? Fans are desperate to see the Khans. (Read: Salman, Shah Rukh and Aamir Khan box office comparison) 2) Salman Khan and Deepika Padukone: The hunky star of Bollywood and the leggy lass together is something we have been waiting for since a long time. After giving three hits with SRK, fans have expressed desire of watching Deepika romancing Salman. Now that’s something. 3) Ranbir Kapoor and Kangana Ranaut: The chocolate boy of Bollywood looks good with any actress on screen. Even though Kapoor brat has romanced Deepika, Priyanka, Katrina etc, Kangana is still missing in the list. 4) Shahid Kapoor and Deepika Padukone: We would love to see this couple on screen. Even though we have seen them together in award shows few times, a film would be great. Our desire will come true as they are working together for Padmavati slated for release on 17 Nov 2017. 5) Ranbir Kapoor and Shraddha Kapoor: Even though Shraddha is just a few films old, we are sure Ranbir and Shraddha would look just lovely together. They both have innocent yet naughty look and are kids of famous stars. 6) Ranveer Singh and Alia Bhatt: Now this is another couple from the young brigade actors of Bollywood we want to see on screen. A rom-com will be lovely to see them. 7) Akshay Kumar and Aamir Khan: I don’t remember any film in which both these suerstars have worked together. Both of them have spent more than 25 years in the industry and we are yet to see them together. 8) Hrithik Roshan and Deepika Padukone: Both are hot, both are glamorous and together they will make one of the hottest on-screen couple of Bollywood. Expect them to set the silver screen on fire with their sizzling chemistry. How many of you agree with our list readers? Please comment down the name of more fresh Bollywood jodis that you would love to see on big screen.