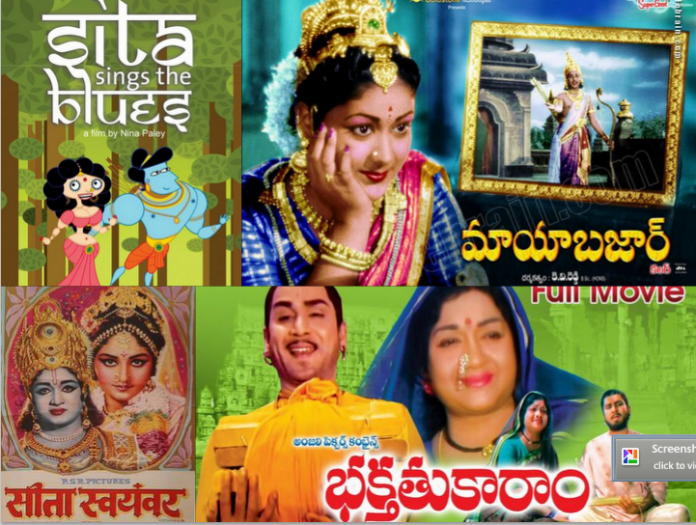 Famous figures in Hindu mythology and the stories told about them have inspired both Indian and western filmmakers for decades. There are too many to go through extensively so here are some of the best, including both classics and some new hidden gems:

Maya Bazaar (1957, Kadri Venkata Reddy)
A classic of Telegu cinema and technically innovative for the time period (it was the first Indian film to feature moonlight). Based upon the Mahabharata epic about magic reuniting lost lovers, the film is just as epic as the story it stems from. Everything from the cinematography to the soundtrack is treated on a grand scale, resulting in every moment of the film feeling like a work of art. An IBN poll listed it as the greatest Indian film ever made and claimed that every major player in Telegu cinema at the time was involved in the film’s production in some way.

Sita Swayamvar (1976, Bapu)
Another tale of going to great lengths for the sake of love, plus weddings, music, and the ongoing struggles of gods and goddesses. Considered one of the best films by prolific director Bapu (although there are many which could lay claim to that title), this film has become such an important piece of Indian cinema that it is included in the British Film Institute’s coursework and frequently appears at film festivals. Bapu aimed to use mythological figures and magical realism in his films to portray realistic family relationships and social issues.

Bhakta Tukaram (1973, V. Madhusudan Rao)
Also considered a hallmark of directing and a ‘must watch for any Indian’, according to at least one IMDB commenter, with notable performances by Akkineni Nageshwara Rao, who was known for the great devotion he gave the title role, and Anjali Devi. This film tells the story of a saint, Tukaram, who uses his devotion to God to teach others to live their lives nobly. The themes of faith, perseverance, and religious opposition are just as relevant today, which is why this story is so well remembered.

Sita Sings the Blues (2008, Nina Paley)
An animated film which while definitely geared more towards adults than children and with an American director, it could still be used as a way to introduce children to Hindu mythology, particularly The Ramayana. Combining Indian mythology, history, and art, it also touches upon current issues such as gender equality, particularly since one segment of the film takes place in the modern day. Receiving critical acclaim from the notoriously picky film critic Roger Ebert and a 100% score on review website Rotten Tomatoes (meaning every single critic gave it a positive review), Sita Sings the Blues seems set to be an animated classic. As a story not often seen by western viewers, it will hopefully introduce Hindu mythology to a wider global audience.

It is clear to see why Hindu mythology figures appear in cinema so frequently. Not only for heritage reasons, but because the stories are complex and epic in scope and the characters incredibly human. Any one of them could give the Disney Princesses some stiff competition!

For more such updates from the film industry visit Bhaskar.com.