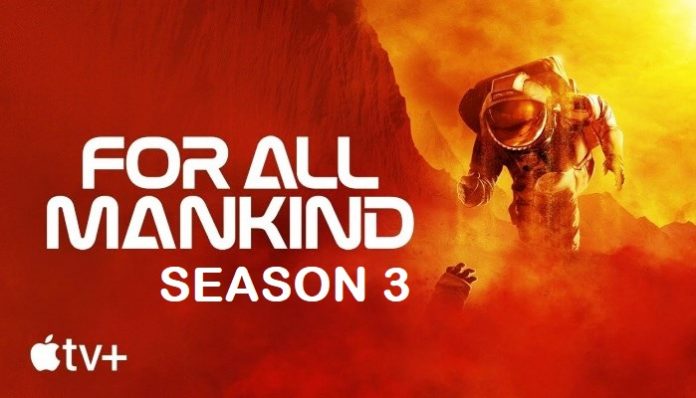 For All Mankind is an American sci-fi space drama on Apple TV+, written and created by Ronald D. Moore, Matt Wolpert, and Ben Nedivi. The series stars Joel Kinnaman in the lead role as a NASA Astronaut and Michael Dorman, Sarah Jones, Shantel VanSanten, Jodi Balfour, Wrenn Schmidt, and Sonya Walger alongside. The series premiered on November 1, 2019, and the last episode aired on April 23, 2021. Fans have been highly anticipating For All Mankind Season 3 ever since.

For All Mankind Season 3 is about to premiere and here’s the Release Time and some “Spoiler-Free” Reviews before you go.

The official plot synopsis for the series reads:

In an alternate timeline, in 1969 a Soviet cosmonaut, Alexei Leonov, becomes the first human to land on the Moon. This outcome devastates morale at NASA, but also catalyzes an American effort to catch up. With the Soviet Union emphasizing diversity by including a woman in subsequent landings, the United States is forced to match pace, training women and minorities, who were largely excluded from the initial decades of U.S. space exploration.

For All Mankind Season 3 Release Date and Time

Apple TV+ renewed the series for a third season on December 8, 2020, after the second season’s premiere. The filming for For All Mankind commenced on February 25, 2021, and concluded in September 2021. The season is now all set to premiere just tomorrow, i.e., on June 10, 2022.

Talking of the release time, For All Mankind will premiere on Apple TV+ at 12 a.m. ET / 8 a.m. BST / 9 p.m. PT (June 9). The third season will comprise 10 episodes in all, which will release weekly. Above, is the official trailer of the upcoming third season, just in case you missed it.

For All Mankind Season 3 Spoiler-Free Reviews

Yes, For All Mankind Season 3 is about to premiere and we already have spoiler-free reviews. In case, you’re getting second thoughts about binging the third season, these non-spoiler reviews would certainly make you clear.

“IN SEASON 3, FOR ALL MANKIND BECOMES THE GRITTIEST SCI-FI SHOW EVER. If you thought Season 2 of the alternate history series was intense, Season 3 is even more hardcore.” – Inverse

“A Perfect Blend of Soap Opera and Sci-Fi Spectacle. For All Mankind Season 3 delivers more of what made its excellent Season 2 so thrilling.” – Decider

“Apple’s Stellar Space-Race Show Keeps Heading Into the Stratosphere. The alt-history drama about the U.S. conquering the cosmos takes a few missteps in its new season — yet it’s still rocketing toward being one of the best shows currently on TV.” – Rolling Stone

“A thrilling ride both on Earth and Mars. Season 3 doesn’t take its foot off the pedal, and it remains one of the most exciting shows on Apple TV+’s growing roster — and all streamers.” – IGN

Where to watch For All Mankind?

For All Mankind is exclusively an Apple TV+ show, so there you can find all the seasons and episodes. The show is also available to stream on Amazon Prime Video, though only in some regions. Apart from that, HBO Max also has the show in some regions, so you can stream there if it’s available to you. The third season of For All Mankind, however, will officially premiere and air on Apple TV+, and later arrive on other streaming platforms.