He is truly a champion cricketer. A man who has made his destiny himself and take Indian Cricket to new heights. Bollywood has decided to honor this man in a form of Biopic. It’s official now, MS Dhoni’s life will be portrayed to big screen in the form of an inspiring tale to be directed by Neeraj Pandey. The movie is being titled as MS Dhoni – The Untold Story.

The first poster of the movie was unveiled on Thursday. Sushant Singh Rajput will be playing the lead role of Dhoni in the movie. The movie is will release in 2015.

The news of biopic surfaced earlier this year, with sources claiming that the movie will cover cricketer’s journey from being a small town boy to becoming the most successful Indian captain. However, there rumours that the Board of Control for Cricket in India (BCCI) would oppose the making of this feature film. But BCCI brushed aside any such rumours and mentioned that they have no issues until and unless it hampers the professional life of the Indian captain.

The movie is being produced by Inspired Entertainment, a group company of Rhiti Sports, in which Dhoni has 15% stake.

Movie will also cover the personal life of Dhoni. The leading lady for the movie is yet to be finalized. Deepika Padukone, Alia Bhatt and Shraddha Kapoor are some rumoured names coming up, but nothing is finalized yet.

Now that the First Look poster is out, fasten your seat belts to witness the extra ordinary story of an ordinary Ranchi boy who becomes the most popular sportsman of the country.

Are you excited to see MS Dhoni – The Untold Story on Big Screen. 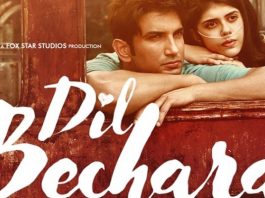