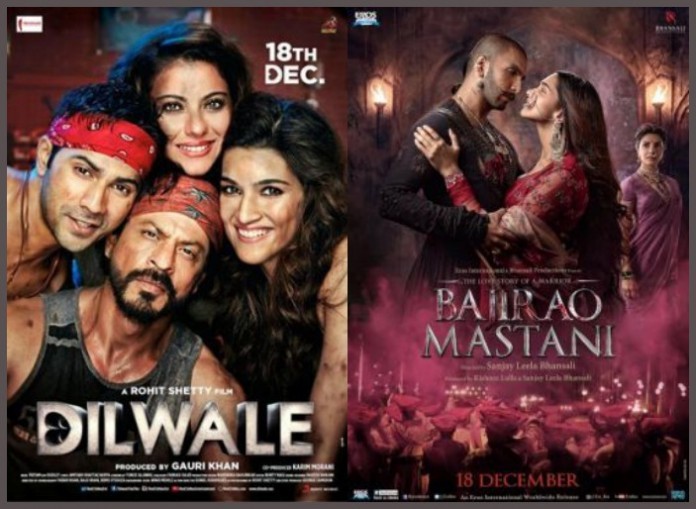 We are just four days away from what we should call the biggest Bollywood clash of the recent times. Yes, Dilwale and Bajirao Mastani are all set to clash on 18 Dec 2015 and let me tell you one thing, it is going to be one hell of a clash at the Box Office.

Both teams are very much confident of their product, and the excitement is at its peak. Recently, both movies were cleared by CBFC without any cuts. Let’s have a detailed look at Dilwale and Bajirao Mastani’s run time and certification details.

Dilwale
Rohit Shetty’s action comedy Dilwale was granted a ‘U/A – Universal Adult’ certificate by CBFC. The movie was passed by censor board without any visual and verbals cuts. The total run time of the film is 2 Hrs 35 Min. The run time of the movie is less than Happy New Year (3 Hrs) but more than Chennai Express (2 Hrs 21 Min).

Bajirao Mastani
Sanjay Leela Bhansali’s Magnum Opus Bajirao Mastani was granted a ‘U’ – Universal only’ certificate. The movie was passed by censor board without any visual and verbals cuts. The total run time of the movie is 2 Hrs 38 Min. It’s good to see that the historical movie with a run time less than 3 Hrs. Bajirao Mastani is expected to be a well-edited product.

What are your expectations from Dilwale and Bajirao Mastani? Share your views with us in the comments section.