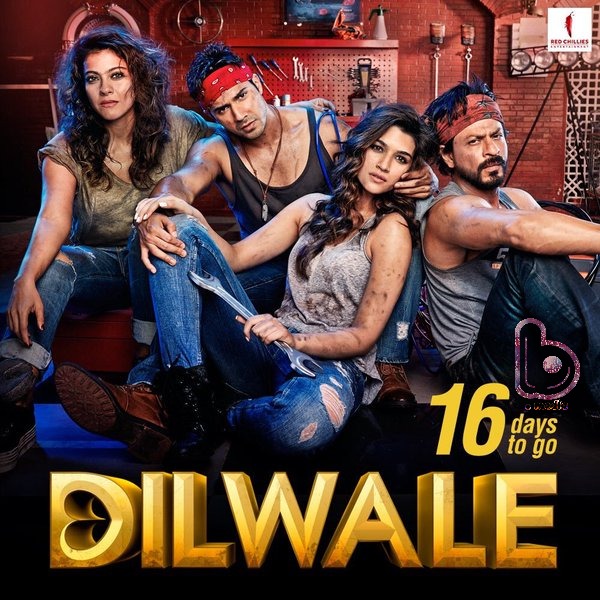 You may hate Dilwale’s music, or you may love it, but you just can’t ignore it

Rohit Shetty‘s Dilwale is soon be released on 18th December. With big names like Shahrukh Khan, Kajol, Varun Dhawan, Kriti Sanon, Boman Irani associated with it, the movie is already creating much anticipation. The music is composed by Pritam Chakraborty and here’s our Dilwale Music Review-

Though the video is highly filled with VFX, we can’t deny the fact that Shahrukh Khan-Kajol jodi has been and will be the most romantic jodi for a long time. Gerua has profited from just this fact. Sung by Arijit Singh and Antara Mitra, the song is quite pleasing and paints a very romantic image in our minds.

Manma Emotion Jaage is sung by Amit Mishra and Anushka Manchanda. The song is high on energy and is fast becoming the dance anthem of the nation. Varun Dhawan and Kriti Sanon’s awesome chemistry in the video is being praised by everyone. Though we would have been happier if the focus was less on cars and more on dance sequences in the video.

Have you seen all the Manma Emotion Dubsmashes?

Janam Janam is one of the best songs of the album. The song is sung by Arijit Singh beautifully. The video is all about the beautiful chemistry between Shahrukh Khan & Kajol. We also see them dancing in the rain much like they did in Kuch Kuch Hota Hai. A soulful number!

4. Tukur Tukur
Tukur Tukur has a very Goan feel to it, I’m quite sure the video will be based on something like that. The lines ‘Aaye ya ya ya..Vasco Da Gama’ only make my suspicion stronger. Another track sung by Arijit Singh though it a peppy dance number, makes you groovy. Tukur Tukur will stick to your heads!

5. Daayre
This soft track by Arijit Singh talks about the ‘Daayre’ of love. The music is very soft with heart-breaking lyrics by Amitabh Bhattacharya. Another great number!

6. Premika
Pritam does not like to stay slow for long. So, here’s another peppy number titled ‘Premika’. Sung by Benny Dayal and Kanika Kapoor, the song has a heard-before kinda feel to it. The lyrics by Amitabh Bhattacharya are catchy. But the song is not everyone’s cup of tea.

7. Theme of Dilwale (DJ Chetas Mix)
The Theme of Dilwale starts off with the same sequence as Janam Janam but on a higher pitch then takes off to a faster pace. I think it’s safe to say that it is a remix of Janam Janam in a way. But I must say good job Pritam, he has used Arijit Singh’s voice at the right places!

Dilwale Music Review | Final words and Verdict
Overall, the soundtrack of Dilwale did impress. It has every essential component form peppy dance numbers to romantic tracks and cheesy numbers. My picks would be Manma Emotion, Janam Janam, Tukur Tukur and Theme of Dilwale. In short, Dilwale music is all ‘Dil’!