Demon Slayer Season 2: The first season of hit anime Demon Slayer concluded on Sep 28, 2019, and the fans are waiting for its second season. Here is everything we know.

‘Demon Slayer: Kimetsu no Yaiba’ is a hugely popular anime series based on the manga series of the same name. The anime series received critics acclaim for its animation and fight sequences. It is one of the best anime of the 2010s. It received numerous awards including the ‘Best Anime’ award at the 2019 Newtype Anime Awards and the ‘Anime of the Year’ at the 2020 Crunchyroll Anime Awards.

The first season aired from April to September 2019 became a huge hit. The fans are now eagerly waiting for the second season. So, when can we expect the next season to premiere? Here is what we know about Demon Slayer Season 2.

Will there be a second season of Demon Slayer?

The fans are eagerly waiting for the return of Demon Slayer. As of now, there is no official announcement about the second season by Ufotable (studio and producer). A sequel movie Demon Slayer: Mugen Train released on Oct 16, 2020 and becomes the highest grossing movie of all time in Japan.

So, what are the chances of Demon Slayer making a comeback with season 2? Well, it is almost certain that Demon Slayer season 2 will be returning. The second season will kick off from where the movie ends.

The continuation of an anime series depends on factors like the source material, its popularity. In the case of Demon Slayer, there is no shortage of source material. Out of 21 volumes, only 6 were used to adapt the first season of the anime. So, we have 15 volumes waiting to be adapted.

Coming to popularity, Demon Slayer franchise had over 120 million copies in circulation, including digital versions, making it one of the best-selling manga series. The anime is one of the best of all time.

Considering the popularity and source material, it would be a big surprise if the season 2 gets cancelled. The only major issue that can put the show on hold is the schedule issues with the studio. Ufotable is a small studio busy with its other projects. It usually works on one big project per year. So, Demon Slayer season 2 may get delayed but chances of cancellation looks fea. Another option is to give the show to a bigger studio.

At the time of writing this, there is no official release date for Demon Slayer season 2. As soon as the first season concluded, Studio Ufotable announced a Demon Slayer movie.

Since there is no official announcement regarding the second season, don’t expect it to arrive anytime soon. Latest we heard that season 2 is in production and they are also planning a sequel movie. Generally, new seasons of Animes take years to arrive. I am expecting Demon Slayer Season 2 to release in 2022.

The story for season 2 will continue from the upcoming movie, which is a continuation of season 1. So, in order to understand the complete plot, you have to watch the movie as well as the first season.

Just finished the final chapter of the manga, and honestly, I think it was a great ending to the series. My favorite part was definitely seeing Giyu, Sabito, and Makomo together reincarnated! Sad it's done, but it's best to not drag it on #DemonSlayer pic.twitter.com/HIIzHiREZ6

The first season’s plot revolves around the protagonist Tanjiro Kamado whose entire family except his sister gets killed by a demon. His sister is transformed into a demon but retains humane qualities and emotions. Tanjiro then sets out on a long journey to avenge his family’s death. He encounters a society that calls itself Demon Slayer Corps.

If you have already watched the first season and want to know what will most likely happen, you can read the original manga here.

The studio ‘Ufotable’ announced the movie following the airing of the final episode of the first season. Titled ‘Demon Slayer: MugenTrain’, the movie released on October 16, 2020.

A mobile game Demon Slayer: Blood-Stench Blade Royale will release in 2021 by publisher Aniplex with development by Aniplex subsidiary Quatro A. A PS4 game published by Aniplex and developed by CyberConnect2 titled Kimetsu no Yaiba: Hinokami Chifūtan has been announced to be released in 2021.

The first season aired in Japan from April 6 to September 28, 2019, on Tokyo MX, GTV, GYT, BS11, and other channels. The English dubbed version premiered in 2019 due to its wide appeal. Major anime websites like Crunchyroll, Hulu, Funimation, Animelab, and Anime Limited have simulcast Demon Slayer in various countries. 2019 also saw the release of the series on DVD and Blue-ray.

In several regions including the Unites States and India, Demon Slayer season 1 is streaming on Netflix. 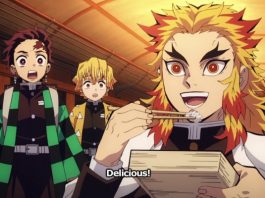 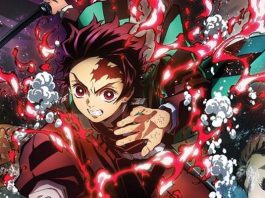 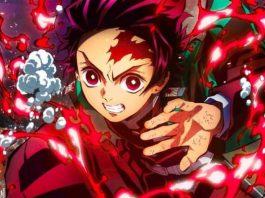