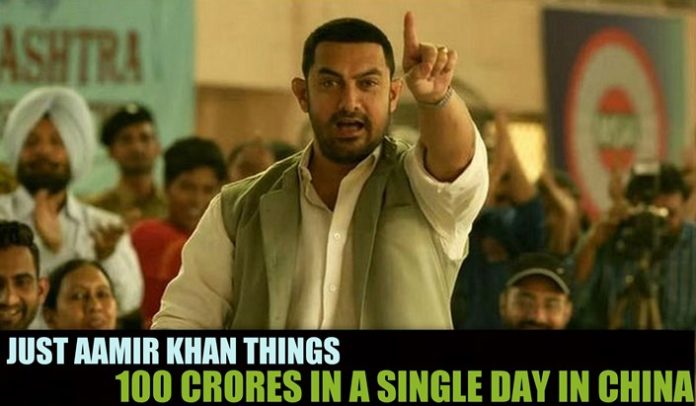 Aamir Khan’s Dangal has emerged as an unstoppable force in China. Even after two weeks of the historic run, the movie has refused to slow down. In fact, on its third Saturday, Dangal fever in China was at its peak. As per the reports coming, Dangal 16th day collection in China is 107.25 crores. This is the first time, an Indian movie has earned 100 crores in a single day in the overseas market. What makes this feat even more splendid is that Dangal has achieved these numbers from a single overseas territory.

Wit the collection of 10.25 crores on its 16th day, the total collection of Dangal in China stands at massive 643.2 crores. These are insane numbers for a Bollywood movie in an overseas territory which is not considered friendly for Indian films.

Dangal has emerged as a huge blockbuster in China. The movie has set new benchmarks at the Chinese box office. It is the first Indian movie to cross 500 crores mark in an overseas territory. Talking about the worldwide collection, Dangal has grossed 1385 crores.

The table above clearly shows that Aamir Khan is the king of Bollywood in the overseas market. He is way ahead of Shah Rukh Khan and Salman Khan when it comes to box office earning in overseas markets. With the current pace, Dangal will soon beat the worldwide collection of Bahubali 2 which stands at massive 1500 crores.