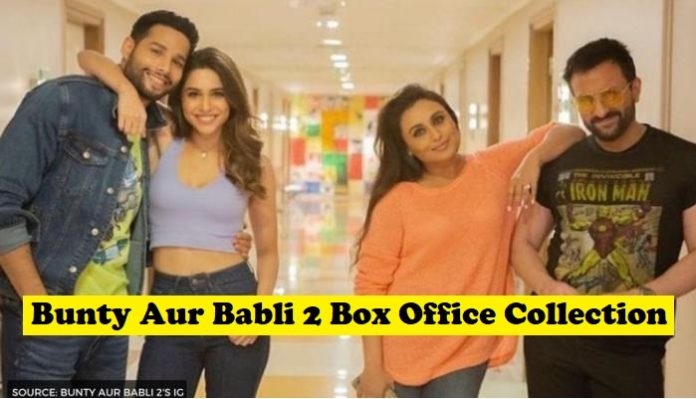 Saif, Rani, Siddhant and Sharvari starerr Bunty Aur Babli 2 is finally in theatres after getting delayed multiple times due to the pandemic. Released amidst a lot of expectations, the movie has failed to impress the critics and audience. As a result, its box office numbers remained flat over the weekend.

Bunty Aur Babli 2 had a poor opening as it collected only Rs 2.6 crore on its first day. After a poor opening, the movie failed to record any growth on Saturday, thanks to poor reviews and negative word of mouth. The makers were hoping for a turnaround on Sunday but unfortunately, it also didn’t happen.

As per early reports, Bunty Aur Babli 2 recorded a marginal growth on Sunday. In fact, Akshay Kumar’s Sooryavanshi that opened in theatres two weeks ago has a better showing.

The first-weekend collection of Bunty Aur Babli 2 is around Rs 8 crores. This is even less than Rani Mukherji’s last two releases Mardaani 2 and Hichki. With no chances of revival, Saif and Rani starrer would end its box office journey under Rs 20 crores. A Big Flop.

Bunty Aur Babli 2 is a sequel to the 2005 crime comedy movie Bunty Aur Babli. It is set years after the events of the first movie. Con-artists and partners-in-crime, Bunty and Babli, are forced out of retirement after a series of robberies with their trademark stamp start taking place across cities.

One of the reasons for the poor show on the first day is that its digital release date is out even before a theatrical release. Bunty Aur Babli 2 will premiere on Amazon Prime Video on Dec 17, 2021.