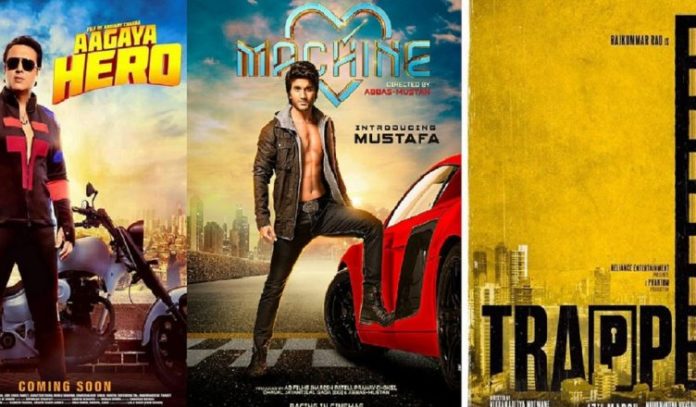 Machine marks the debut of Mustafa Burmawala, son of director Mustan Burmawala. Abbas-Mustan Jodi is famous for directing thrillers like Aitraaz, Ajnabee, Khiladi etc but they have terribly failed this time around. ‘Machine’ has been thrashed by the critics as they have designated it as the worst movie of 2017.

Released on around 1000 screens, the movie open to 5% occupancy and failed to register any growth in the later part of the day. As per early estimates, the first day collection of the movie will be less than 1 crore.

Govinda’s comeback film ‘Aa Gaya Hero’ finally saw the light of day. But the response has been pathetic, to say the least. The movie opened to around 5% occupancy on single screens and with no growth as the day progressed, the box office fate is sealed on the first day itself. As per early estimates, the first day collection of the movie will be less than 1 crore.

Talking about the last release of the week, Rajkumar Rao’s Trapped has received superb reviews from the critics. The critics have rated it as the best movie when it comes to the performance of the lead actors. But again such movies always fail to get audience.

The producers should understand that such movies have no takers in theatres. It could have been better if the movie had been released on the digital channels.

Emma Watson’s most awaited movie, ‘Beauty And The Beast’has a fair start at the box office. It has a wide release compared to the Bollywood releases. The first day collection of the movie will be around 2.5 crores.

Varun Dhawan and Alia Bhatt starrer Badrinath Ki Dulhania remained the first choice for the moviegoers. It maintained a strong hold on its second Friday. As per early estimates, the 8th day collection of the movie will be more than 5.5 crores.