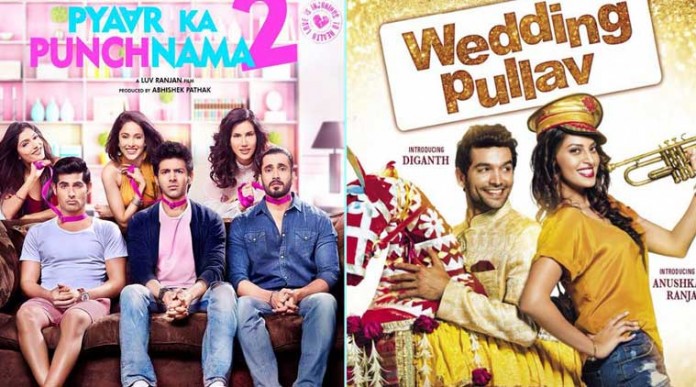 It’s a buffet of Bollywood movies this weekend. As many as seven movies are releasing this weekend –  Pyaar Ka Punchnama 2, Wedding Pullav, Chinar Daastaan-E-Ishq, Hogaya Dimaagh Ka Dahi, Bumper Draw, Operation Green Hunt and Jaatiwad. Out of these seven, Pyaar Ka Punchnama 2 and Wedding Pullav are expected to have good Box Office numbers. Other five releases will find it difficult to have a respectable release at the Box Office.

Let’s have a look at the Box Office predictions of Pyaar Ka Punchnama 2 and Wedding Pullav.

Pyaar Ka Punchnama 2 is a sequel of Pyaar Ka Punchnama released in 2011. Pyaar a Punchnama after a poor start went on to become a decent hit at the Box Office. The movie is one of the favorites among the youngsters and has gained a cult status over the years. Though, there is a big change in the star cast, the sequel has created a good buzz thanks to special promotions and the old fan following attached to the movie. Considering the current hype and buzz, the movie should collect at least 5 crores on its opening day. Pyaar Ka Punchnama collected 12 crores in its lifetime and we can expect the sequel to earn at least thrice the prequel.

Talking about the other  big release Wedding Pullav, the film marks the debut of Anushka Ranjan and Diganth. The movie is directed by famous cinematographer Binod Pradhan who is also making a debut. The film’s promotion has been good and the movie has created decent buzz thanks to good music. The movie has youth appeal which could work in its favor. If WOM and reviews turn out to be positive then Wedding Pullav will give tough competition to Pyaar Ka Punchnama 2.

What are your expectations from this week releases – PKP 2 and Wedding Pullav? Share with us in the coments section.