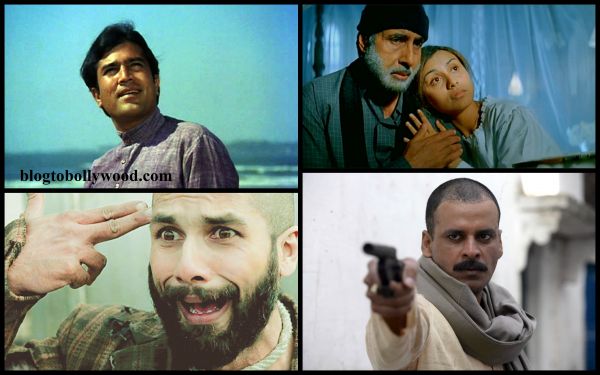 60 years of Oscars nominations. Around 280 nominations and just 3 Indian contenders. No winners. That’s the story so far for Bollywood- World’s biggest movie-making industry. We can’t exactly blame th Oscar jury, there are a lot of Indian movies that could have made it big in the Oscars. But sadly, they were not even nominated! So, here is a list of 15 Bollywood movies that we think absolutely deserved to be nominated for the Oscars-

There is no better movie that can explain the plight of farmers and the bitterness of capitalism in India. A debt-ridden family moves to the big city, Calcutta to raise the money it needs to save their land from a greedy zamindar. Do Bigha Zameen exposed the grip the ruthless zamindars had on agriculture in newly-independent India. Made in 1953, Do Bigha Zameen probably would have made it as India’s Oscar pick, if not for the fact that we only started sending Oscar submissions in 1958, beginning with Mother India.

Guru Dutt’s tour de force, Kaagaz Ke Phool, is a tale of a movie director who reflects on his life. Unhappily married, Suresh Sinha (Dutt) falls in love with a young orphaned woman, Shanti (Waheeda Rehman). He makes her into a famous movie star thus beginning a romantic liaison between the two. But Sinha’s daughter breaks them up, eventually leading to Sinha’s death in the director’s chair. Considered to be Guru Dutt’s most melancholic movie ever, it totally deserved to be an Oscar nominee, but in 1960, India sent Satyajit Ray’s Apur Sansar or The World Of Apu to the Oscars.

Bhuvan Shome is amongst the earliest attempts at what came to be later known as ‘art-house’ or the ‘new cinema movement in India’ in the late 1960s. Mrinal Sen’s low-budget film is one of the most touching movies. He brings out the nuances in this simple yet touching story so poignantly. No special effects, no dramatic moments! Just simple depiction captured on film to move the audience. The film brought Mrinal Sen his first National Award as Best Director together with the film, and Best Actor for Utpal Dutt.

This is a movie that can make even the toughest soul cry, a must watch for Rajesh Khanna fans. Anand Saigal (Rajesh Khanna), a young man from Delhi is suffering from terminal cancer and doesn’t have much time left to live. He comes to Bombay to live his last days as well as to get treated for his disease, where  Doctor Bhaskar Banerjee (Amitabh Bachchan) is given Anand’s responsibility. Anand and Bhaskar forge a wonderful friendship and story. Watching Rajesh Khanna (who passed away 4 years ago) in his elements as the lively and fun-loving Anand will lift your spirits.

Ankur was Shabana Azmi’s first film, earned her the first of her five National Film Awards. Directed by Shyam Benegal, it is often credited to be the leading sheep of the Indian art film movement known as “parallel cinema,” in which both Benegal and Shabana are central figures. Unusually for Indian cinema, it is an entirely realistic film without singing and dancing. This movie won a total of three National awards. In 1975, India sent M S Sathyu’s Garam Hawa to the Oscars.

Ardh Satya, meaning ‘half truth’ revolves around the life of Anant Velankar, an honest policeman who reluctantly joins the police force because of his dominating father and then begins the story of how he is thrust into the big bad world. This work of Govind Nihalani is a disturbing landmark movie. Sadashiv Amrapurkar as Rama Shetty gives a convincing performance and Om Puri excels as the frustrated young man of the period, earning him the National Award for Best Actor. This movie, unlike most of Indian movies lacks song and dance, yet it had full houses all over India because the generation of the turbulent 80’s identified themselves with Anant Velankar.

Black Friday is a blow-by-blow account of the 1993 Mumbai serial blasts. The grim tale of the conspiracy and the people caught in it is told with a refreshing sincerity. Anurag Kashyap uses his ensemble cast brilliantly. While Kay Kay Menon (as Rakesh Maria, the cop who led the investigation) and Pawan Malhotra (as Tiger Memon, the main accused) steal the limelight and screen space, the smaller characters give the movie its poignant moments. Kashyap used hidden cameras to shoot the movie! What can be more amazing!

This is Shakespeare’s Macbeth transformed into Mumbai’s underworld with a dream cast of Vishal Bhardwaj, portraying the world of crime and fate. Maqbool takes its emotional content beyond any other film of this genre, transports us to a gateway of pain and redemption which was until then lost to Hindi cinema. Pankaj Kapoor went on to win a Filmfare Award for Best Actor (Critics) and a National Film Award for Best Supporting Actor. The film was screened in the Marché du Film section of the 2004 Cannes Film Festival.

Black’ is the story of Michelle McNally (played as a child by Ayesha Kapoor, and as an adult by Rani Mukerji), a girl robbed of her sight and hearing by an illness at a young age. Her parents hire an eccentric teacher Debraj Sahai (Amitabh Bachchan) to tutor Michelle. Rarely is a film of such sensitivity, precision and elegance made in India. Indeed, Black is inspired by the life of Helen Keller and her teacher Anne Sullivan, but Bhansali makes it in his own way. In short, Black is dark but it is purely vibrant cinema. Black could have been India’s ticket to the Oscars.

Take a basic plot of a city under seize, threat of bombs, administration turning everything upside-down, add some very basic action to it, cast the most wonderful cast and now you have our attention. That’s what A Wednesday! did to the audiences. Critics credited the movie for its effective storyline and its twist ending. Subsequently, it won a number of awards including the Indira Gandhi Award for Best First Film Of a Director at the 56th National Film Awards. It even got remade in English as A Common Man. What else do you need to nominate a good movie like this?

Udaan tells the story of thousands of youths from India’s middle-class families. It is an emotionally charged film that at times moves you to tears. Udaan is the story of agony and breaking away to achieve one’s dreams. Even though the pace is extremely slow at times, the film’s talented cast portrays an array of human emotions and you are inexorably drawn into the lives of Rohan and his family & friends. Udaan was officially selected to compete in the Un Certain Regard category at the Cannes Film Festival that year.

Directed by Tigmanshu Dhulia, this movie is based on the true story of the athlete Paan Singh Tomar. A soldier if the Indian Army, who wins a gold medal at the Indian National Games but is forced to become a notorious bandit. The movie is an exquisite blend of drama, humour and tragedy made with great attention to detail. It paints an honest picture of an India few of us can claim to know. The film won the award for Best Feature Film and Irrfan Khan rightfully received the award for Best Actor at the 60th National Film Awards.

Anurag Kashyap directed this two-part gangster movie about vengeance, greed and deep-rooted family rivalries. GOW directly takes on Quentin Tarantino with its cinematically-inspired violence, ironic characters and amazing pace. It is considered by many as a modern cult film.  There are plenty of moments of pure inspiration that lift Gangs of Wasseypur above the constrictions of the genre. The film collected four Filmfare Awards and many other awards.

The Lunchbox is actually a romance in the classic tradition. Irrfan Khan plays Saajan, an ageing office-going guy who finds the wrong lunchbox delivered to his desk and falls into a platonic relationship with an unhappy housewife named Ila ( Nimrat Kaur). The Lunchbox is perfectly handled and beautifully acted; a quiet storm of heaped-up emotions. This is a film made with love- just like the food Ila lovingly packs in those ‘Dabbas’. A Gujarati film The Good Road was preferred to be sent to the Oscars that year.

Vishal Bhardwaj blew our minds away with Haider, his best one so far in my opinion. A Bollywood musical adaptation of Shakespeare’s `Hamlet’ set in Kashmir, this brand of cinema is possibly the best answer to the movies made just for the sake of earning money. Shahid Kapoor (Haider) plays a poet whose father is caught harbouring a militant and had since disappeared. His mother Gajala, played by Tabu and uncle Khurram (Kay Kay Menon) get married, giving way to Haider’s disgust. This movie is so beautifully adapted in the Kashmiri backdrop that it becomes a rare gem!

Which of these movies had the best chance of winning an Oscars? Tell us what you feel below.