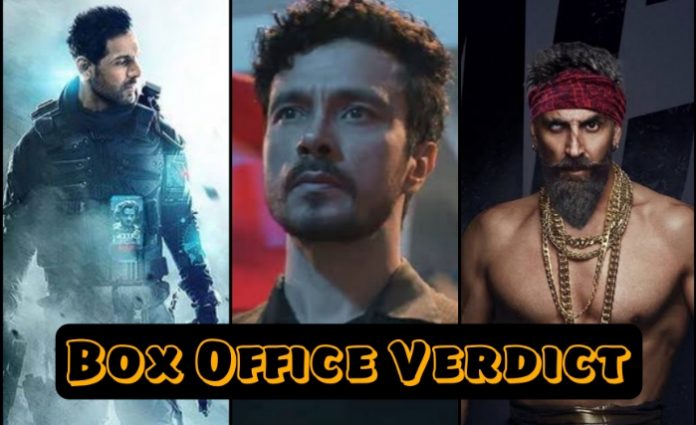 There is no denying that Bollywood is going through a bad phase. The post-pandemic releases haven’t lived up to the expectations. As a result, most of the movies released this year so far have tanked at the box office.

We have already entered the sixth month of the year and all we can say is that it has been a disastrous year for Bollywood so far. Out of 15 notable releases, only two have managed to make it big while 13 have tanked at the box office. Here’s a look at Bollywood box office Verdict 2022.

The first major Bollywood release of 2022, Badhaai Do, collected Rs 20.62 Crore in India. It was a box office flop.

Alia Bhatt’s Gangubai Kathiawadi received rave reviews and collected Rs 129 Crore in its lifetime. Despite performing well, it’s a box office failure thanks to its massive budget of Rs 180 Crore.

Amitabh Bachchan starrer social drama Jhund was received well by critics. However, it failed to make much impact at the box office.

The most unexpected blockbuster of the decade is The Kashmir Files. Vivek Agnihotri’s directional emerged as a revolutionary movie and created a huge impact on society. It became one of the most profitable Bollywood movies of all time in terms of ROI.

Shahid Kapoor tried to repeat the blockbuster success of Kabir Singh with Jersey. However, the movie failed to cross Rs 20 Crore at the Indian box office.

Ajay Devgn, Amitabh Bachchan, and Rakulpreet Singh starrer thriller received rave reviews from fans and critics. However, it failed at the box office probably due to its limited appeal.

The expectations were high from Tiger Shroff’s Heropanti 2 as it was a sequel to his hit debut movie Heropanti. Ahmed Khan directional was a total washout at the box office despite being released on Eid weekend.

Kartik Aaryan, Tabu, and Kiara Advani starrer Bhool Bhulaiyaa 2 received much love from the audience. Released amidst low expectations, the movie emerged as a box office blockbuster. It is still going strong at the box office.

The biggest disaster of the year and probably one of the biggest of all time is Kangana Ranaut’s action thriller Dhaakad. We don’t have much to say as this movie failed to cross even Rs 5 Crore mark in its lifetime.

Ayushmann Khurana and Anubhav Sinha collaborated again after the success of Article 15. However, this time the duo failed to create any magic at the box office.

Akshay Kumar and Manushi Chhillar’s magnum opus Samrat Prithviraj has been completely rejected by the audience. Mounted on a budget of Rs 300 Crore, the movie is struggling to cross even the Rs 75 Crore mark. After a box office debacle, YRF is planning an early OTT release for Samrat Prithviraj.

The biggest hits are the dubbed Hindi versions of RRR and KGF 2. The Hindi dubbed versions of South Indian movies like Radhe Shyam, Vikram, Valimai, Beast, and Major have also failed at the box office.

Now, all eyes are on upcoming Bollywood biggies Laal Singh Chaddha, Vikram Vedha, Brahmastra, and more. Do check our list of most anticipated Bollywood movies of 2022.