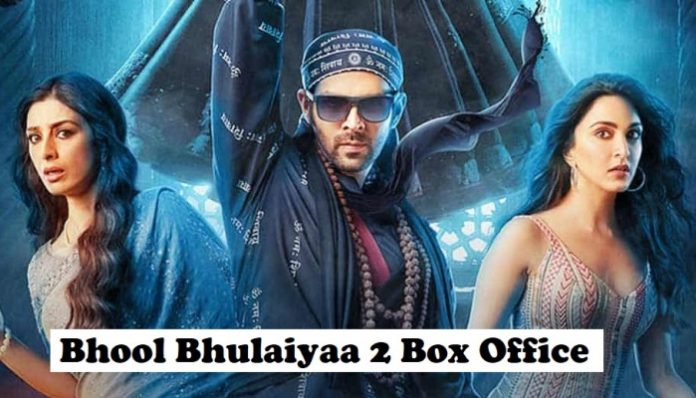 Kartik Aaryan is emerging as a true crowd-puller at the box office. His latest release Bhool Bhulaiyaa 2 is performing excellently well at the box office. Released on May 20, the horror-comedy helmed by Anees Bazmee has exceeded expectations. After an excellent opening week, the movie recorded superb numbers in its second weekend.

Bhool Bhulaiyaa 2 witnessed an excellent increase in collections on the second Sunday. According to early estimates, the horror-comedy collected around Rs 13 Crore on its 10th day to take the total collections to Rs 122 Crore range.

The movie recorded excellent occupancy on its second Sunday. It registered around 65% occupancy on the morning and afternoon shows as the family crowds come in big numbers. The movie recorded good growth as the day progressed. Housefull shows were reported from many centers, especially in the evening. The collections could have been higher if there was no IPL final. The night shows were hugely impacted by the IPL final.

With a collection of Rs 122 Crore, Bhool Bhulaiyaa 2 is now the highest-grossing movie for Kartik Aaryan. It has overtaken Sonu Ke Titu Ki Sweety, which had collected Rs 108.95 Crore.

Crossing Rs 150 Crore from here looks like a cakewalk, Bhool Bhulaiyaa 2 is now aiming for bigger numbers. The lifetime numbers of Bhool Bhulaiyaa 2 depend on how well this Friday releases, Samrat Prithviraj and Major perform at the box office.