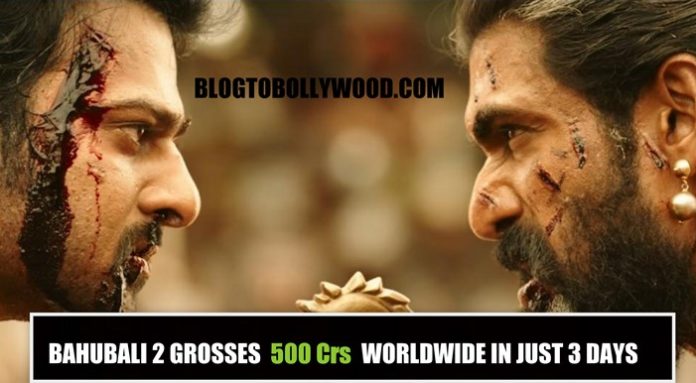 Bahubali 2 Worldwide Box Office Collection: Bahubali 2  is unstoppable at the worldwide box office as it grosses 500 crores in the first weekend.

Bahubali mania has gripped the world. The moviegoers across the world are going gaga over the movie. This can be judged by the fact that it has grossed 500 crores worldwide in the first weekend. The movie has exceeded all expectations as no one has thought that it will cross 500 crores in the first weekend. Within just three days, Bahbauli 2 has emerged as one of the biggest blockbusters of Indian cinema.

It has set all-time opening weekend records in the markets of Australia, New Zealand, UAE, Canada and America. In USA, the film gave strong competition to Hollywood movies like ast and Furious 8 and Beauty & The Beast.

The overseas dominance of Bahubali can be judged by the fact that it has beaten the Thursday previews collection of biggies like Fast and Furious 8 and Beauty & The Beast. As per a report by leading trade websites, Box Office Mojo, Bahubali 2 earned $2.5 million (Rs. 16.02 crores) in USA on 425 screens.

The trade website further reported that Bahubali 2 secured the topmost position in the list by surpassing the other Hollywood movies – Fast & Furious 8 ($1.9 million), Beauty & The Beast ($661K) and Boss Baby ($526K).

In just three days, it has become clear that Bahubali 2 will break all box office in India as well as overseas. It will become first 500 Crore grosser in India. The movie will also gross 1000 crores worldwide, the record which will be tough to beat for the upcoming movies.

What are your views on Bahubali 2 worldwide collection? Share your thoughts with us in the comments section.