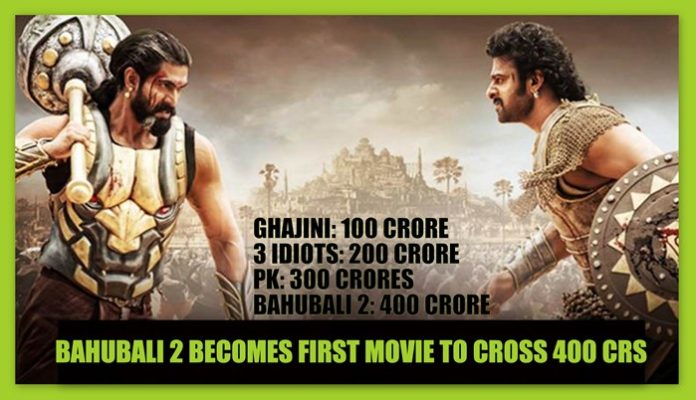 Bahubali 2 has done something incredible and unthinkable. Who would have thought that the Hindi version of a south Indian movie will shatter all Bollywood Box Office records? Bahubali 2 had one it and that too in a record time. Since the day of its release, the movie is on a record-breaking streak.

The record-breaking run continues to its third Friday as well. On its 15th day, the movie creates yet another box office record. As per early estimates, Bahubali 2 earned around 12 crores on its third Friday. It has become the first movie to cross 400 crore mark in India. This is an unbelievable feat as we are talking about the collection of Hindi version. What makes this more glorifying is that Bahubali 2 has achieved this milestone in just 15 days and that too without any festive season.

With the current trend, SS Rajamouli’s film is expected to cross 450 crores by the end of the third week. It has an outside chance to even cross 500 crores mark in Hindi version. Talking about the all India collection, the movie has so far earned 800+ crores. The gross collection of the movie in Indian stands at 1000+ crores.