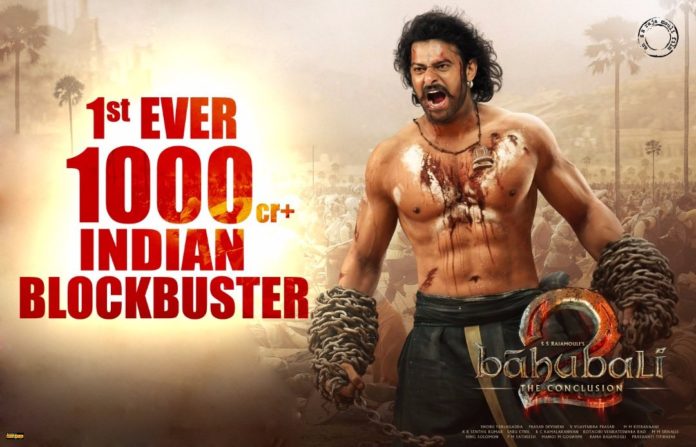 Bahubali 2 Becomes First 1000 Crore Movie Of Indian Cinema. It has grossed 800+ crores in India and around 200 crores in overseas.

According to a tweet by leading trade analyst Ramesh Bala, the movie has grossed 800+ crores in India and around 200 crores in overseas. With this, Baahubali 2: The Conclusion has become the first Indian movie to collect  INR 1000 crores worldwide. With 1000 crores already in pocket and that too within just 10 days, Bahubali 2 will now look to extend its historic run. With no competition at the domestic box office for the next two weeks, Bahubali 2 is now eyeing more box office records that will be difficult to break in years to come.

The next target of the movie is to beat the lifetime collection of Dangal (388 crores), to emerge as the highest grossing Bollywood movie in India.

Directed by SS Rajamouli, Bahubali 2 stars Prabhas playing the titular role and Rana Daggubati as Bhallala Deva, Sathyaraj, Ramya Krishna, Anushka Shetty, Tamannaah Bhatia in principal roles. Made on a budget of 250 crores, it is the biggest motion picture of Indian cinema till date.