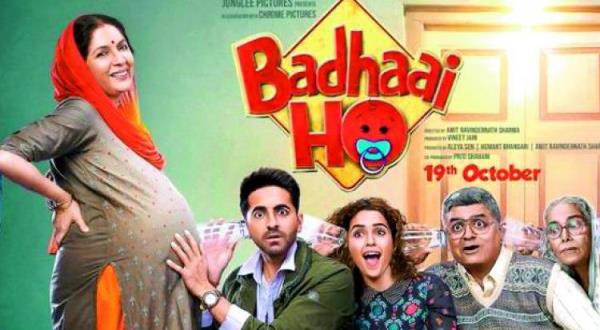 Ayushmann Khurana is having a dream year of his career. In a span of one month, the talented actor has delivered two big hits with Andhadhun and Badhaai Ho. Both movies have received incredible reviews from critics and loads of love from the audience.

Released on 18 October 2018 along with Namaste England, Badhaai Ho is having a dream run at domestic the box office. It has emerged as one of the biggest surprise hits of the year.

Released along with Namaste England on 18 Oct 2018, Badhaai Ho got off to an incredible opening. It recorded the 12th highest opening of 2018 with the collection of 7.29 crore.

The movie has recieved superb reviews. The WOM of the audience is extremely positive. These two factors have helped the movie as it witnessed good growth over the extended first weekend. Badhaai Ho earned 11.67 crore, 12.5 crore and 13.5 on Friday, Saturday and Sunday respectively to earn 45+ crore in the extended four days opening weekend.

After a superb opening weekend, the movie remained rock-steady on weekdays as well. On Monday, it saw a drop of just 18% compared to the first day and earned 5.65 crore. On Tuesday and Wednesday, it remained strong and earned 5.5 crore and 5 crore respectively.

On last day of the first extended week, Badhaai Ho earned 5 crore to take its first week total to 65+ crore. The total collection of the movie after 8 days stands at 66.85 crore.

Badhaai Ho is one of the biggest suprise hits of the year along with movies like Stree, Raazi and Sonu Ke Titu Ki Sweety. Made in a budget of 25 crore, Badhaai Ho is already a big hit at the box office with the collection of 67+ crore.

With no big releases this week, Badhaai Ho is in for another good weekend at the box office. It is expected to earn 20+ crore in the second weekend. It has a strong chance to enter elite 100 crore club of Bollywood. Well done Ayushmann Khurana and company. Badhaai Ho on the film’s grand success.