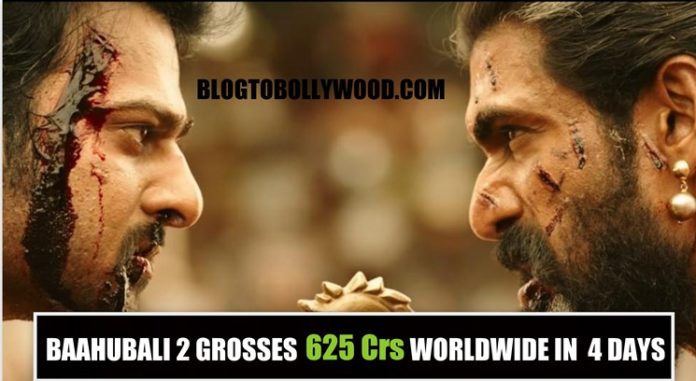 Baahubali 2 grosses 625 crores worldwide, it will cross the worldwide collection of Baahubali: The Beginning (650 crores) in just 5 days.

There is no stopping for director S.S. Rajamouli’s magnum opus Baahubali 2: The Conclusion at the domestic and overseas box office. The movie is shattering every possible box office record at the worldwide box office. The audience is going gaga over the film and even after four days of its release, the viewers are excited to know  ‘Why did Kattappa kill Baahubali?’.

The dominance of Baahubali 2 can be judged by the fact that the Hindi version of the movie has earned 164 crores in just four days. Despite being a dubbed movie, it has beaten the four days collection of all Bollywood movies released till date. Baahubali 2 is all set to become the fastest 200 crore grosser movie beating Salman Khan’s Sultan (7 days) and Aamir Khan’s Dangal (8 days).

In the overseas market, the movie has grossed 138 crores in four days with some regions yet to report. In US only, the movie had a record-breaking opening weekend as it earned $10.2 million (68 crores). Let’s have a look at Bahubali 2 worldwide collection in four days.

With the worldwide collection of 628 crores, Baahubali 2 is now the fourth highest grossing movie of India. It is only behind Aamir Khan’s Dangal (730 crores), PK (792 crores) and Baahubali: The Beginning (650 crores). Considering the current pace, we are assured that the movie will gross 1000 crores worldwide.