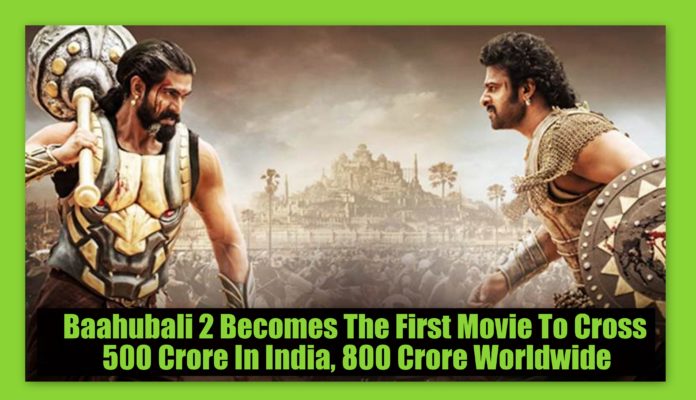 SS Rajanouli’s Bahubali 2 is writing box office history. It is creating box office records which no one would have thought of around ten days back. The movie is on a record-breaking streak from the opening day has completed the first week on a historical note.

Baahubali 2: The First Movie To Cross 500 Crore In India

In just one week, Bahubali 2 has collected 540 crores (All Languages) to become the first film to cross 500 crore mark in India. It has beaten the lifetime collection of all Indian films to become the highest grossing movies of all time India.

Coming to the worldwide box office, Baahubali 2 has grossed mammoth 860 crores in just one week. It has beaten Dangal (742 crores) and PK (792 crores) to become the highest Indian worldwide grosser.

With no big releases in the next two weeks, Bahubali 2 will be targeting to collect 700 crores from India alone. The worldwide collection of the movie is expected to cross 1000 crore mark by the end of the second week.